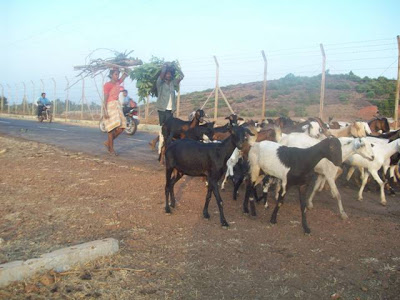 PANAJI: It certainly pays handsomely to be at the right place and at the right time, especially when the State government agrees to generously dole out compensation to eagerly push ahead with its flagship project.

Believe it or not, the State government has agreed to compensate two different groups of beneficiaries for the same land acquired for the Mopa airport in Pernem.

Fourteen Dhangar families, declared as "project-affected families" despite merely residing on land acquired in Cansarvarnem-Pernem for the proposed Mopa airport, will now stand to benefit by a whopping Rs 12 crore compensation package on 36,800 sq metres of rehabilitated land, which includes several benefits, facilities and amenities.

At the same time, the government will also compensate about six land owners in the form of monetary benefits for the same land acquired for the Mopa airport.

The government had acquired 78,41,730 square meters of land for the project, spread across nine villages in Pernem taluka, for the airport to be constructed by GMR.

According to records, the 14 Dhangar families are neither owners nor tenants of the land, but are officially declared as "encroachers". As per the land acquisition act, "encroachers" are entitled to compensation, only equivalent to the cost of their dwelling unit.

The rehabilitation of these 14 Dhangar families had been the main bargaining chip and demand for those opposing and seeking to stall the Mopa airport project.

In a bid to silence these opponents and to persuade these 14 families to vacate the area acquired for the airport, the government went on the overdrive, classified them as "project-affected families" and offered a more than generous compensation package on a different area of Cansarvarnem, not included in the Mopa airport project.

Then as part of his election promise, Sports Minister and Pernem MLA Babu Azgaonkar had assured to fulfill demands of the 14 Dhangar families. Following his election, Azgaonkar intervened in the matter and sent a proposal to the government to acquire 36,800 sq meters of land in Survey 207, another part of Cansarvarnem to rehabilitate the 14 affected Dhangar families.

This land proposed to be acquired at Cansarvarnem belongs to the Shree Sateri Devi temple, with Vishram Naik, Vasant Parab and Pandurang Naik as tenants in the land.

Finding it difficult to acquire as per the present Land Acquisition Act, the government has now agreed to Azgaonkar's proposal to acquire 36,800 sq meters of land, by following the land acquisition policy framed by former chief minister Laxmikant Parsekar, reliable sources told The Goan.

According to the proposal accepted by the government, Rs. 5.83 crore will be spent on acquiring land, while an additional Rs 6.33 crore will be earmarked on rehabilitation benefits for the 14 Dhangar families.

In addition, each family will get a cow/goat shed on 50 sq meters of land, a community hall to accommodate 150 people, a crematorium and 20,000 sq meter of grazing land for goats and cattle.

Besides, electricity, water, road and other infrastructure facilities will be provided in the area, while each family will be assured one job at Mopa airport.

"With this consent, all claims pertaining to families owning or residing on land acquired for the Mopa airport have been settled, paving the way for the smooth and unhindered construction of the Mopa airport," the government official added.

THE BONANZA THAT AWAITS THEM