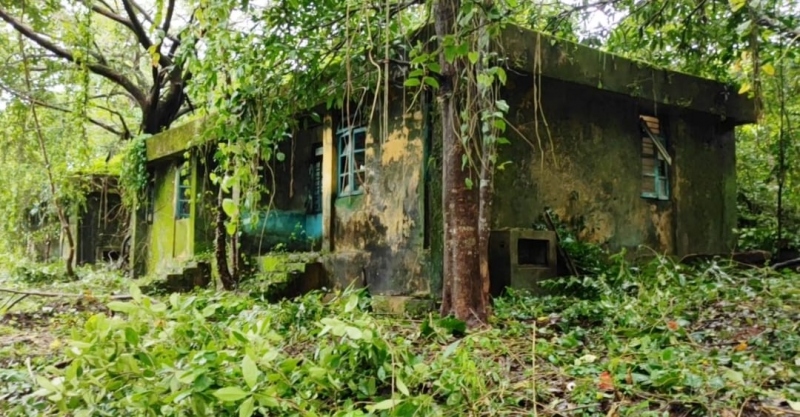 Leprosy hospital land where the police bus was spotted on Wednesday.

MARGAO
The controversial Indian Reserve Battalion (IRB) camp proposed to come up at the Leprosy hospital, Curtorim came back to haunt the villagers as they rushed to the site after being told that cleaning work inside the property was underway with police protection.

When Sarpanch Milagres Rodrigues, deputy Sarpanch Simon Barretto and ex-Zilla panchayat member Moreno Rebello along with people descended on the leprosy hospital land, they did not find police bus inside the property as reported though vegetation near the crumbling structure had been cleared.

They later reiterated their demand that the sprawling land admeasuring three lakh square meters be utilized for a health and medical institution instead of an IRB camp.

They vowed not to allow the IRB camp at the Leprosy Hospital land, reminding that the land in question was donated by a good samaritan for a charitable cause and not for setting up an IRB camp or a police station.

Briefing the media, Moreno Rebello said that land admeasuring three lakh square meters was donated by Dr Floriano De Mello for the welfare of the people, to build a leprosy hospital. “This land should be utilized for a good purpose by setting up a public utility project relating to health and medicine. There is no clarity on the land in question whether it will be utilized for an IRB camp or to shift the Maina Curtorim police station”, he added.

Moreno reminded that the Curtoirm gram sabha has adopted at least two resolutions, opposing the IRB camp on the leprosy hospital land, adding that the government has no right to misuse the gifted land.

Curtorim deputy Sarpanch Simon Barretto made it clear that the villagers of Curtorim and neighbouring villages will oppose the IRB camp or a police station on the leprosy hospital land. “The land in question was donated by a public spirited citizen for the welfare of the villagers. Let the government use the land to set up a medical or health institute or a laboratory, we have no objection”, he added.

He demanded to know why Curtorim MLA Reginaldo Lourenco did not bring the matter to the notice of the Health Minister during his visit to Curtorim on Tuesday to felicitate the Covid warriors.

Sarpanch Milagres Rodrigues said the people came rushing to the site after being told that a police bus was at the site to clear the vegetation and bushes on the leprosy hospital land.