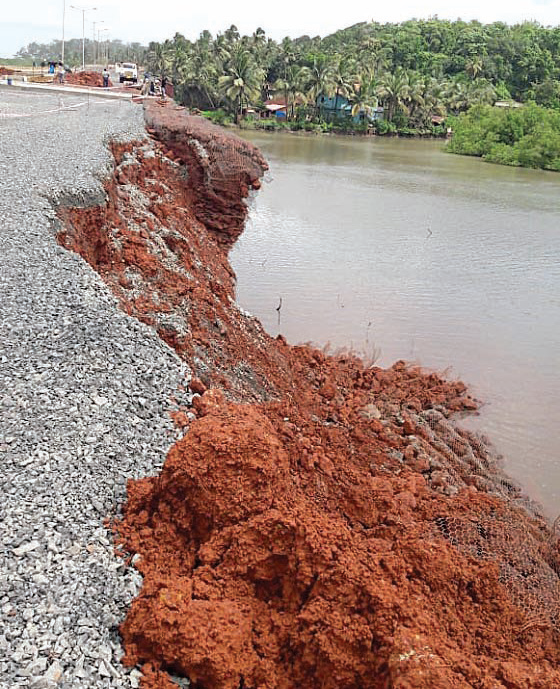 THE GOAN NETWORK
CANACONA
Locals fears were confirmed on Sunday morning as a side wall of the 5-metre height 4-lane road (extension to Maxem creek bridge) in Maxem river collapsed.
The NHAI had constructed a 480-metre long bridge and 100-metre long mud-filled road at Maxem creek despite bitter complaints from Maxem residents who have been raising concerns of flooding and environmentalists who demanded an extension of the bridge by at least 75 metres (two spans) longer.
On Sunday, about 30 metres of the roadside which is about 5 metres in height to match the height of the bridge on Maxem creek, collapsed. That's not all, the west-side wall has also developed a tilt and is likely to suffer the same fate sooner or later.
"It was about 8am on Sunday morning when locals heard an unusual sound originating from the road construction site. When they ran to see what the problem was, they found the entire side of the road collapsing," informed Santana Da Costa, a former panch and husband of present Dy sarpanch Jessica Corte of Loliem-Polem panchayat.
Canacona MLA Isidore Fernandes who resides in the same village also rushed to the site.
Speaking to The Goan, Fernandes said that he would raise the issue in the Goa Assembly on Monday and criticized the authorities for bad road engineering works as the reason for such a disaster.
"Right from beginning, we have been demanding an extension of the Maxem creek bridge by another two spans, but the PWD engineers believed otherwise and went on to landfill the river by putting some pipes under it for so-called free river water flow in the creek," said a resident.
Echoing the local residents concerns and sentiments, Fernandes said, "Even though nearby Galgibaga river and Maxem Creek has wide openings/spaces around it, Maxem residential area is still flooded during rains, and constructing a road with mud fill of about 5 metres height in Maxem creek is indeed bad road engineering. The concerns of locals and environmentalists are vindicated by today's development. Now, it's for the authorities to take a call."
Environmentalists and residents meanwhile have alleged that the landfill to construct this road is totally illegal and the works itself do not have environmental sanctity.
Incidentally, a resident of Loliem, Pamela Rodrigues along with some locals had approached the Bombay High Court at Goa over the construction of the Galgibaga and Maxem Creek bridge and road portion.
"This should be an eye-opener to those authorities in responsible positions. We, thank God there were no casualties," she said,
Pamela and others have a case pending in the High Court, the next hearing for which is scheduled for 7th August.
According to environmentalists, the PWD has previously filled the entire Maxem creek with mud to construct a 680 metres long 4-lane road connecting Galgibaga bridge. But following their petition, the court directed removal of the mud, and the PWD then began constructing a bridge over the Maxem river. However, the bridge was constructed only to about 480 metres, while the remaining 100 metres of the creek was filled with mud.
However, the earlier mud filling in the Maxem river basin is still not removed showing disrespect to the court, they alleged, stating that their plea for removal of mud from this portion is still being heard in the court.
"We anticipate the PWD to now go in for some face-saving activities by repairing this wall, but we are approaching the authorities for a stay on such lip service activities, which are very dangerous in future," Pamela said.
Incidentally, Chief Minister Pramod Sawant had during his visit to Canacona in May assured to throw open the three bridges and a 10 km 4-lane road from Char Rasta to Maxem (Loliem) on July 22 at the hands of Union Minister Nitin Gadkari.