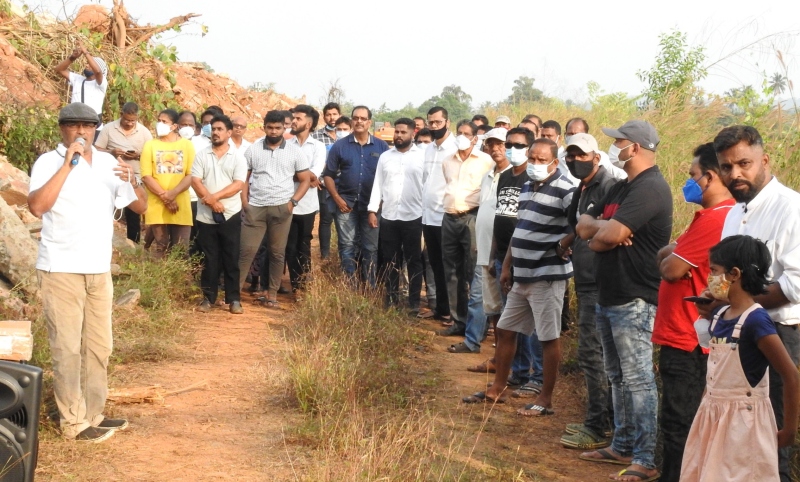 ﻿MARGAO
After the Railways bulldozed with the track doubling project, villagers of Chandor and Guirdolim are now bracing up for another battle – to stop the railways from going ahead with the ongoing work, which they suspect as being executed to pave way for the laying of 10 tracks along the line.

As they vowed to stop the Railways from executing the work on the additional rails in the villagers, fearing these additional ones are being planned to make the two villages a coal hub, the villagers have also decided to protect the church property, which has been devastated by the ongoing work.

The villagers have received support from activists from outside the two villages, besides politicians, as they vowed to defeat the present government in the ensuing polls if the plan to make Goa a coal hub is to be scrapped.

Church attorney Darwin Cardozo feared that 10 rails will become a reality if the people do not foil attempts being made to acquire the church property.

“They have already laid the double track, but they are going ahead with the land acquisition. Once they acquire the land, the 10 rails will become a reality and it will be used as a dumping ground and for washing, which will pose a health hazard to the villagers and pollute the adjoining water bodies”, he said.

Darwin explained to the people how the Railways have entered the Church property when the Fabrica has opposed the acquisition of the land. He said the railways had asked the church to hand over the land in 2018.

“After we refused to part with the land, it came with a consent letter, but was never signed by the Fabrica. Now, they have put the land for acquisition before the Deputy Collector, Vasco. We have filed our written objection for the acquisition”, he said, while urging the villagers to join hands to oppose the acquisition in order to foil attempts to lay 10 rails in the area.

A villager Jarret D’Silva said people of the two villages do not want Chandor and Guirdolim to be made a coal hub. Asserting the ongoing movement is apolitical, Jarret said the villagers have come forward to protect the villages and their future.

Chandor Sarpanch Edward D’Silva stressed the need for the people to come out on the streets to foil the plan to make Chandor a coal hub. ‘The ongoing work the Railways are doing is not for double tracking, but it may pave way for laying of around 4-5 tracks. The Railways has encroached on private property,” he said, while giving a call to the people to unite and stop the government from making the two villages coal hubs.

Guirdolim panchayat member Jose Antao pointed out that the panchayat has some time back refused to grant NOC for water connection for Railways building on the plea that it has not produced the outline plan before the panchayat body.

“We had asked for the outline plan to find out the plan of the Railways in Chandor and Guirdolim, but the same has not been given till date”, he said.

Social activist Freddy Travasso urged the villagers of Chandor and Guirdolim to stay united, pointing out how the villagers of Sao Jose de Areal won a major battle against illegal basalt and crushing units after 12 long years.

Activist Vikas Bhagat called for a movement to give a befitting reply to the Railways for carrying out the illegal work. He also called for the defeat of the present BJP government in the ensuing polls.

Cuncolim Congress leader Yuri Alemao condemned the Railways for bulldozing its way with the work in Chandor and Guirdolim, while blaming the BJP government for not supporting the locals in the ongoing agitation.

TMC leader Dr Jorson Fernandes said the patience of the people is running out and warned the government that it will have to face serious consequences if plans for the coal hub are not scrapped immediately.