Task cut out for candidates in Saxtti

Kick-starting campaign on one banner & later joining another party, candidates now have to win trust of voters again 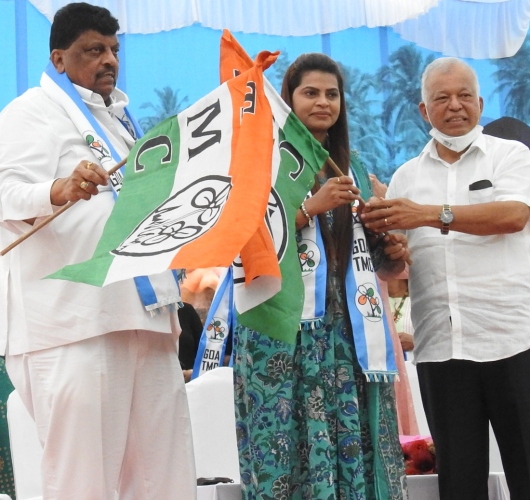 MARGAO
Just imagine a situation when a candidate kick-starts his election campaign on one banner, but ends up being a candidate of another political entity.

Election 2022 may be different for another reason. It is understandable that sitting MLAs quit membership of the House and their political outfits ahead of the ensuing polls. A good number of candidates have not only hopped parties, but even kick-started their campaign before landing into different parties.

In fact, instances are galore in Salcete and outside how politicians, including seasoned players, after having launched their campaign and after covering lot of ground, are now candidates of different parties, leaving the voters a confused lot. Assembly constituencies in Goa may be comparatively small compared to other states, but how these politicos approach the very same voters, but on a different party banner and symbol, for vote remains to be seen.

Take the case of Benaulim constituency. Sitting MLA Churchill Alemao had kick-started his campaign from Benaulim village on the NCP banner, anticipating an alliance with the Congress. As it turned out, Churchill finally landed in the Trinamool Congress, and is now the TMC candidate for Benaulim.

That’s not all. Months before Churchill could embrace the TMC, noted tiatr producer Tony Dias had kicked off his campaign in Benaulim as an Independent. And, when it appeared certain that Churchill would seek re-election on the NCP Clock symbol, Tony along with his supporters joined the TMC.

Since then, there’s been no turning back for Tony, who covered a lot of ground in Benaulim constituency. After Churchill’s entry into the TMC, Tony has last week quit the party to contest the February polls on the Congress banner.

That’s not the end of the story in Benaulim. Flamboyant Mickky Pacheco, who had joined the Congress in mid-August last, had kicked off his campaign in Benaulim last week, moving door-to-door in Seraulim village.

After he decided to stay put with the Congress on his birthday, putting at rest speculations that he is not heading to the Aam Aadmi Party, then Congress MLA Reginaldo Lourenco had virtually kicked off his campaign for the 2022 election to play yet another innings on the Congress banner.

After the Congress declared his candidature in the Party candidates first list, Reginaldo fanned out to various corners of the constituency, with a plea to the loyal party voters to return the party to power. Then came his U-turns. Not only Reginaldo quit the Congress to embrace the Trinamool Congress party, but left the Mamata Didi-led party and is now going back to the very same voters with a plea to elect him as an Independent.

His arch rival and Congress candidate, Moreno also cannot escape the charge of changing parties. Anticipating that the Congress would nominate three-time former MLA Reginaldo Lourenco for the Curtorim seat, Moreno had quit the party on December 10 to embrace the ruling BJP at a function in Curtoirm attended by ruling party stalwarts Chief Minister Pramod Sawant and BJP president Sadanand Tanavade.

Moreno, however, quit the BJP on December 31 after Reginaldo left the Congress and is now the Congress official nominee for Curtorim.

Former Independent MLA, Benjamin D’Silva is another case in point in Velim constituency. He embraced the Congress late last year with the hope of getting the party ticket for Velim. In fact, Benjamin and his supporters had registered around 3,000-new digital members and had covered a lot of ground in the constituency, anticipating that the party would reward him with the ticket.

As it turned out, the Congress nominated Velim Sarpanch Savio D’Silva for Velim, leaving Benjamin with no option than to embrace the Trinamool Congress.

That’s not all. The TMC, however, had already projected young Margao-based lawyer, Adv Antonio Clovis da Costa, who had kicked off his campaign in Velim with ace tennis player Leander Paes.

How Benjamin will go about telling the voters that he is now in the fray on the TMC banner and how Adv Antonio Clovis goes about in Velim still remain unclear.

Congress-turned-NCP candidate Rehan Mujawar is another case in point. Having started his campaign on the Congress banner, Mujawar has now landed in the NCP. He covered a lot of ground in Navelim and had held meetings in the constituency, seeking votes for the Congress.

With the Congress leadership nominating former Independent MLA Avertano Furtado as the candidate for Navelim, the task before Rehan is cut out – how to go about to the very same people and convince them to cast their vote on the NCP Clock symbol.