As yet another Teachers’ Day rolls around this 5th of September, a day that is intended to celebrate their achievements and contributions, has instead, become one to stocktake and assess the multiple unfairness meted out to teachers in Goa.

A few months ago, an innocuous question in Class 10 English grammar paper, on how “without influence and money, finding a job in Goa is difficult,” which most Goans will agree with wholeheartedly and which reflects the reality of the state of affairs, was found to be “objectionable” by the communally sensitive within the BJP. A drama was enacted wherein the demand for strict action against the teachers responsible for framing the question came from the BJP which is now filled with former Congress MLAs.

At the peak of the pandemic, instead of safeguarding the health of the teachers — which has a direct effect on the learning of lakhs of students — and allowing them to conduct online classes from home, the government insisted that teachers report to schools most of which do not have internet connections to conduct classes in defiance of the MHA and Education Ministry orders. No concern was shown to those with comorbidities. The protests of teachers against the same fell on deaf ears, and not many days ago, a 59-year-old teacher from Vasco succumbed to Covid just months before her retirement after being required to travel to her school in Curtorim from Vasco which was considered to be a Covid hotspot.

Thousands of para teachers are languishing with an uncertain future, feeling cheated, not knowing what lies ahead despite putting in several years of service in the prime of their youth.

Time and again, there is insensitivity towards teachers’ issues in the state. Events like the CM’s “virtual interaction with teachers on Teachers’ Day,” (which may now be in jeopardy following the CM’s Covid positive status), are meaningless and just for a publicity show; they do not result in any real change on the ground.

As many people are in the know, the two most important pillars of AAP’s governance are health and education. A focus on teachers and their upliftment is one of the principal reasons Delhi’s education revolution in government schools has been so successful. That revolution has meant that the children of the poor and the marginalised, some of whom are first-generation learners, get what the rich get in private schools.

Those who have heard Manish Sisodia, by now the best-known education minister in the country, speak or have even read his book titled ‘Shiksha’ will know that the revolution did not come about without the passionate involvement of the teachers. Sisodia even did away with all kinds of enumeration or survey duties and kept teachers exclusively to do the work for which they had been chosen. In contradistinction is the lowering of teachers’ self-respect in Goa by assigning odd jobs remotely connected with teaching. It looks like teachers have hit a dead wall of government apathy.

So what is the solution to government apathy towards teachers’ issues? The test of any government lies in how it deals with issues closest to the common people. Education is one of these. The Goa government has failed over and over to win teachers’ confidence. The AAP government in Delhi has overcome the biggest challenges, winning the trust of the teachers and in return getting more than impartation of knowledge from them. Their performance is exceeding expectations and transforming the lives of those who will shoulder the responsibilities of tomorrow.

All this with strong backing by the government. Their satisfaction level is so high that every day is now a Teachers’ Day. For our teachers, September the 5th will be a day of momentary glory. The ‘untaught’ in the government will let the year pass without much thought, until next September 5th, when they will be remembered again.

(The writer is the Convenor of AAP Goa. He has closely seen the transformational processes used in education by the Delhi Government) 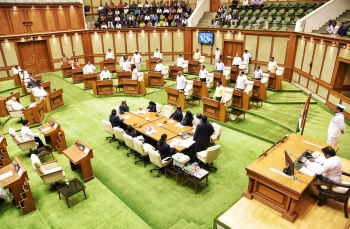