Ensure Galgibaga bridge work is within ambit of law: HC 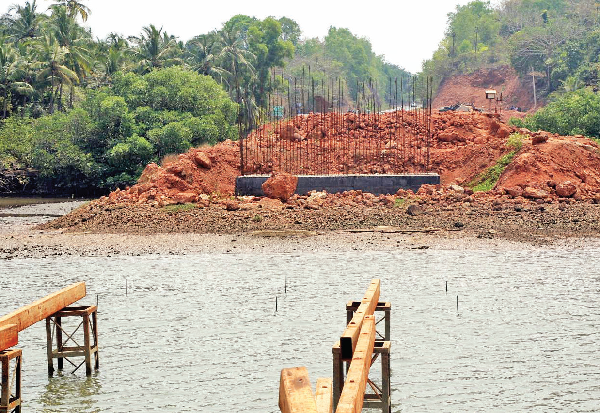 the goan I network
CANACONA
In a significant development, the High Court of Bombay at Goa has placed the responsibility on GCZMA and Captain of Ports to ensure ongoing construction work of the Galgibaga Bridge and associated road construction work at Maxem is carried out strictly within the permission granted and the law, and it does not cause any immediate danger.
Admitting a Public Interest Litigation (PIL) filed by Pamela Rodrigues of Loliem village, the high court said the “counsel for the petitioner submits that work which is going on, is not in consonance with the permissions that have been granted and if the works continues in the same manner, in view of the onset of the monsoon, various problems would arise, including the flooding of the banks and nearby villages.”
“In view of this concern, though we are not granting any ad-interim at this stage, we place the responsibility on the Goa Coastal Zone Management Authority and the Captain of Ports to ensure that the ongoing work is strictly within the permission granted and the law, and it does not cause any immediate danger,” said the high court.
In her PIL, Rodrigues had stated that the petition was filed “to bring to the notice of this court the ongoing illegal construction of a bridge across Maxem Creek and filling of the Galgibaga River Estuary at Mashem in Canacona taluka, in violation of CRZ Notification 2011 and the CRZ clearance granted.”
The petitioner claimed that “ongoing violations would threaten the village with disastrous flooding in the future, obstruct present fishing activities, permanently destroy the potential for shipping and related economic activities and would destroy the environment and marine life.”
The petitioner exhibited as many as 18 documents in her PIL, the oldest being a letter written by a local resident Minguel Rodrigues in 2000, objecting to the filling of the entrance to Maxem Creek for the construction of the new NH 17 alignment, besides various other representations by different people to various authorities and permissions granted by authorities.
The petitioner has sought the removal of mud and debris dumped for filling of the Galgibaga River Estuary at Mashem, restoring the site to its original condition, complying with the vertical clearance of 10m at Maxem Creek and to take immediate action against the violator responsible for filling of the river/riverine land at Mashem.