NGT's Delhi shift: CM says he did it


PANAJI
Revealing that it was his idea to rejig the NGT jurisdiction and bring Goa under the ambit of the principal bench at New Delhi, Chief Minister Manohar Parrikar defended the decision saying Goa has excellent connectivity with Delhi.
Speaking to media persons on the sidelines of a function, Parrikar said, "Goa is a small state, so I can't maintain legal set up in Pune... maintain legal set up in Delhi... legal set up in Goa. So I wrote to the Environment Minister that we should be given Delhi because there we have our Resident Commissioner and we will attend it from Delhi. It's not that the matter has been taken out from court or something. And ultimately, if there is any judgment, you have to go to the High Court or Supreme Court."
Parrikar said that it was the State that had written to the Ministry of Environment, Forest and Climate Change (MOEFCC) for transferring Goa related environmental cases from Pune to Delhi and not a unilateral decision by the MoEFCC.
Strongly batting for Delhi, he said, "Connectivity to Delhi from Goa is excellent. Cost wise also, if you take the night flight it is not much."
"Many of the cases in NGT Pune go haywire because of inconvenience of sending advocate due to various reasons. We don't have a legal set up in Pune. So as we have difficulties, we have written to them. We have followed necessary procedures, taken necessary approvals and finally it has been agreed. Now since it is in the court, let court decide", he stated.
Speaking about the difficulties the government faces, he said, "Doesn't the State have any role to play? If the case is scheduled on a particular day, I have to send an officer to Pune on the previous day. Connectivity with Pune from Goa is very bad. The advocate has to go in the afternoon, attend the case next day and return on the third day. So for one case, three days have to be spent. I do not have legal set up in Pune. Pune is absolutely inconvenient. If they had to set up regional office in Pune, it would have been okay for us."
The decision to shift the NGT jurisdictions to bring Goa under the ambit of Delhi has been universally derided not only by environmental activists but also the Goa High Court Bar Association and has been challenged by four separate writ petitions in the Bombay High Court at Goa as well as a suo motu writ petition taken up by the HC on grounds that the decision is arbitrary, unreasonable, illogical as well as being malicious move by the state government to make environmental justice prohibitively expensive and inaccessible for litigants from Goa.
The matter will come before the High Court next week. 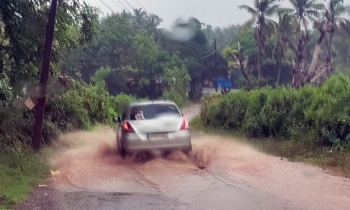