Craze for football has doubled since ISL: Aaren

Ponda teen is emerging striking talent roped in by FC Goa’s Youth Development teamrnrnFor 19-year-old Aaren D’Silva from Ponda, the craze for football started since ISL got underway. In fact, the same doubled for this lanky striker as he has set a goal of playing for FC Goa and has signed up for the Club’s youth development team

PANAJI
With the advent of the Indian Super League in 2014, many young footballers were fuelled with bigger dreams and desires. And for young hopefuls and emerging talent from the State it was to play for FC Goa, the home franchise.
A 19-year-old from Ponda, the lanky Aaren D’Silva is one such exciting prospect. “The craze of football started since ISL got underway. In fact it doubled as I had a target to play for FC Goa and as I signed up for the Club when the opportunity came along,” the promising forward stated.
One of the nine signings to the FC Goa Developmental squad, unlike many of his contemporaries Aaren was a rather late bloomer.
But he had interest in the game since he was an eight-year-old. At the age, he recalls avidly watching EPL on the television and having great admiration for Cristiano Ronaldo since he joined Manchester United. While conceding that hailing from Ponda, with not much of players or facilities available, there was no competitive environment in his city. But then, he began to hone his skills under Retina Fernandes, the then SAG Ponda Coach.
“Players like Velanie Fernandes (Goa Women’s footballer) and myself, used to train under her in Ponda and we used to be taken to Fatorda for the GFA organized football festivals for U-10, U-12,” Aaren added.
A turning point in his fledgling career as a footballer came one fine day when his dad saw a newspaper advert for the Sesa FA selection U-16 trials. Aged 15 at the time, he underwent two rounds of trials to make it to the final cut of 20 promising footballers from a large initial contingent of 120 players. I was four years with Sesa Football Academy training under Head Coach Ajay Acharya and Junior Coach Biano Fernandes. With SFA, his thoughts began to mould to realizing there was a future in the game.
The year he joined SFA, he represented the outfit in the GFA U-16 tournament wherein they emerged winners in the final, defeating Dempo SC 4-0 wherein he scored a goal. In his very first match for the side, he scored the most goals (10) in a 36-0 rout of an U-16 Sankhali FC side, a GFA record at the level.
He went on to strike it rich upfront by emerging the tournament top-scorer with 25 goals from nine matches. In the following year, he was part of a runner-up SFA side in the GFA U-18 tourney. Thereon, in his final year at the Academy, in 2014-15, he debuted with the side in the GFA First Division tournament. He served indication of his scoring prowess by netting eight goals in the said tournament.
“In the last match of the League, I scored a hat-trick against Panchwadi United,” he fondly recalls. As he was playing well with Sesa, he went on to represent Dempo SC on loan in the U-19 I-League that same season and he scored thrice from eight games.
His burgeoning stock was recognized by Alfred Fernandes, the serving Coach at Churchill Brothers FC who invited him to join their ranks for the Goa Pro League in the following season. He also received an offer to join FC Bardez. But he eventually decided to take up the offer made by SCC Cavelossim which promised him more match time.
“In the season for the GPL, I played all the matches and came off the bench in only two of the games. While I may have scored three goals, I also gave six assists in the tournament,” he stated.
Towards the fag end of the season, he received a call to join the senior State side for the Santosh Trophy. Prior to which, in the Reliance Foundation Youth Sports tournament held in the State, representing Rosary College, Navelim he was part of the winning team that defeated Dempo College, Panjim 5-1 in the finals in the State Championship. In the said tourney, he won the Golden Boot and Golden Ball (10 goals in six matches) as well.
While he was a part of the Santosh Trophy side that travelled to Bhopal, Madhya Pradesh to play the Qualifiers, he did not get an opportunity to play. His chance was soon to come in the final round of the aforementioned tourney to be played at home.
“In our very first game against Chandigarh, I scored a goal. Captain Francis Fernandes came forth and crossed the ball in path, and I slid the ball into the nets,” he vividly recalled. 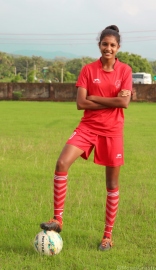 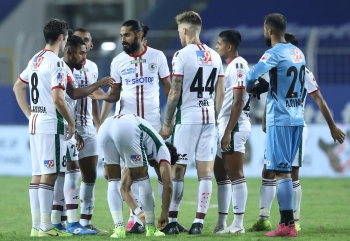 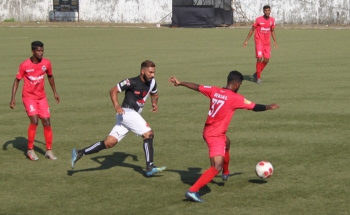 Vasco start with 2-0 win over Churchill 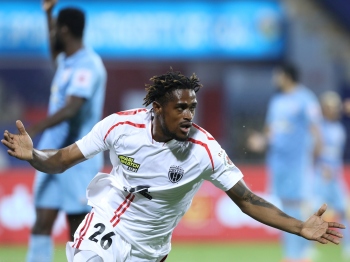 NorthEast do a double against mighty Mumbai 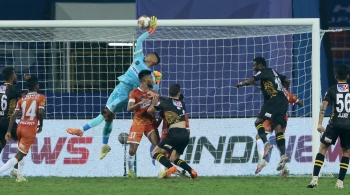