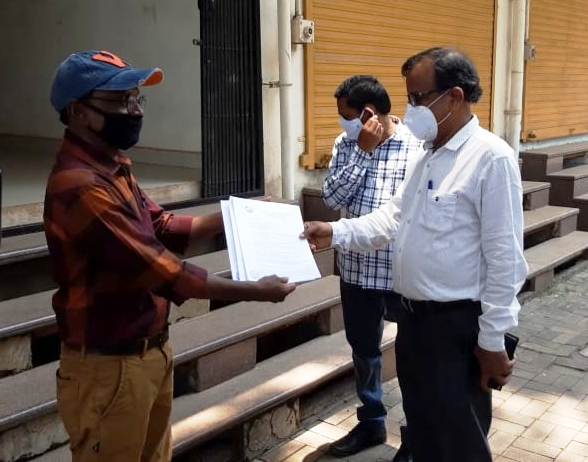 MARGAO
The Goyant Kollso Naka has demanded that government must see reason and logic and stop all works related to the double-tracking project immediately with the Central Environement Committee report unequivocally recommending the revocation of the permission for the construction of the second track through the Mollem National Park and the Mahavir Wildlife sanctuary.

This demand was sent in writing to the Union Minister of Railways, the Chief Minister, the Chief Secretary, SWR, RVNL, Collector (South) and all the authorities concerned.

A delegation of the villagers from Chandor, Guirdolim, Sao Jose De Areal and other villages met the General Manager of RVNL, Sahoo and his assistant to submit representations and to demand that all ongoing works be stopped. The officials have been warned that failure of the authorities to respond immediately will amount to criminal refusal to act in public interest, cautioning that this will force the people to carry out their constitutional duties in order to prevent waste of public funds, save the future generations and prevent senseless destruction of Goa

The NGO, which has been spearheading the anti-track doubling  project along with other NGOs, pointed out that the CEC Report No 6 of 21 has unequivocally recommended the revocation of the permission for construction of the second track through the Mollem National Park and Mahavir Wildlife Sanctuary granted by the Standing Committee of the National Board of Wild Life.

“Due to its impossible terrain, this section is the bottleneck that limits the number of trains that can run on this route. Refusal of permission for doubling of this bottleneck section means that all the works in remaining sections will not increase the capacity of the route. All the works carried out for the double tracking are now a waste of Public Funds and absolutely useless, as was warned by the people of Goa”,  GKN Convenor Antonio D’Silva stated. He asserted that it is abundantly clear from the CEC report that this railway line is not needed and therefore is completely against Goa and India’s interests”.

The GKN added: “From the moment the CEC report has been published, every paisa spent on this project is a criminal and intentional waste of Public Funds in order to further the interests of a few corporations. It is inconceivable that despite the revelation that the project is neither needed nor permissible, Public Funds are being flushed down the drain, while destroying our water bodies, fields, agricultural lands and villages.”

Villagers from Chandor, Guirdolim, Sao Jose De Areal and Arosssim, Ganv Bhavancho Ekvott, United Against Coal, Goyant Kollso Naka and Federation of Rainbow Warriors said it is the unanimous demand of all Goans and the State of Goa that the Government must see reason and logic and stop all works for the double tracking project immediately.