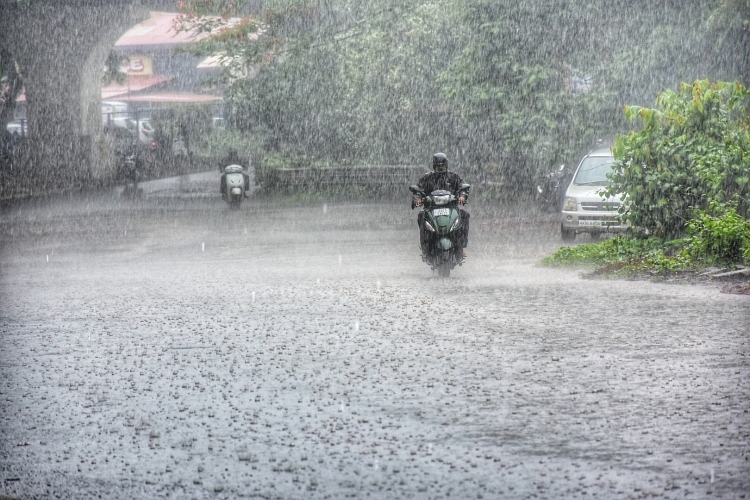 ﻿PANAJI
Many parts in Goa were lashed by very heavy rain on Monday in tune with the red-colour warning issued by the Indian Meteorological Department.

The IMD has further extended the same warning for Tuesday (June 15). It has warned of extremely heavy rainfall at isolated places in the State for two more days.

On Monday, many areas recorded heavy rainfall. Pernem recorded the highest, 32.6 mm, in three hours in the afternoon, followed by Mapusa with 24 mm and Panaji 22 mm.

Rain is very likely to be accompanied by winds of speed of 30-40 kmph in both, North and South, districts. Isolated locations and ghats may receive prolonged spells of rain.

On Monday, Panaji and Porvorim witnessed waterlogging. The Panaji-Mapusa highway was flooded in many places. Water entered some houses on both sides of the road.

The rains picked up as the day progressed and picked up momentum in the evening.

Bicholim recorded 90 mm rainfall. Mayem, Chodan, Kudshire and Harvalem areas witnessed losses due to tree falls. Five houses were damaged. The total cost of the damage is around Rs 3.5 lakh.

The Bicholim MLA Pravin Zhantye visited the home that was damaged at Mayem and assured the family of compensation. “We are all prepared for an emergency situation,” stated the Mamlatdar Pravinjay Pandit. The PWD engineer at the water supply department K P Naik informed that after cyclone Tauktae, there was a total of 730 mm of rainfall in the area.

In what could be a message for the disaster management to be ready, the IMD has warned of short-term flooding and waterlogging of roads and settlements for the next two days.

It said there could be localized short-term disruption to municipal services like water and power supply. It has also warned of the possibility of mudslides and rockfalls in hilly and ghat areas. Rains accompanied by heavy could also damage crops and increase in water levels of rivers and canals.