When anyone of his age would be interested in playing hide and seek, child prodigy Atharva Nadkarni not only solves riddles in trignometry, reads autobiographies of scientists, uses computer languages but has created his own website by coding 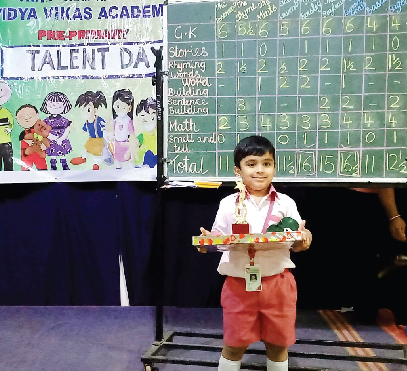 Step in his home in Margao and this little hero greets you with a broad innocent smile. It hardly takes a minute for the wiz kid to jell with you and tell his latest read - this time it’s ‘The Right Word at the Right Time’ - A guide to the English language and how to use it. This fat book that belongs to his grandfather was grabbed by this child prodigy who declared that he would like to have it for himself. Scattered on his tiny table are Dorling Kindersley’s ‘Illustrated Oxford Dictionary’ and ‘DK Find Out’, Knowledge Encyclopaedias of Human Body and Nature, World Atlas, Solar System, Universe, Animals, and so on… anyone of his age would find these books boring or uninteresting but for him they are his prized treasures and he doesn’t want to part with them at any cost!

Gifted with a sharp memory Atharv Nadkarni knows what is there on each page of the book ‘365 Questions and Answers about Universe!’ And ask him the spelling of the longest word in Oxford English Dictionary and pat, comes his answer. “Oh, it’s a medical word - ‘Pneumonoultramicroscopicsilicovolcanoconiosis’,” quips Atharv who spelt and pronounced it correctly for the first time when he was just three.

This is only the tip of the iceberg. There’s more to add to his extraordinariness. Atharv will be celebrating his sixth birthday on April 29 and as if to gift himself, he has designed and developed an official website of his own, on his own, not by using ready pamphlets but by the complicated decoding system. A child prodigy, Atharv completed working on his website until February 25 however launched it on April 6, 2019. Probably the youngest in Goa to design and develop a website using the complicated decoding method, Atharv who has answered senior KG, will be in first standard in June this year.

Atharv’s father Mayur Nadkarni claims that since there is no mention of any five-year-old to have done his own website, probably, Atharv is the youngest, self-taught kid to do so in Goa or even India. “There is a seven-year old in UK who was trained by his father who claims to be the youngest according to Google,” informs Mayur who had registered the domain on Atharv’s name in September 2018 thinking he should reserve it for Atharv to use when he grows up. But impatient Atharv expressed his wish to work on it and have a website now, than later. Today his website www.atharvnadkarni.com is a reality. Rest is history.

Groomed by liberal parents who water their little son’s eagerness for learning, admit that Atharv is fond of everything that triggers his curiosity - books, music, games, sports, dance, quizzes, puzzles and riddles. “Atharv was only a year-and-a-half, he could identify alphabets and even read words and signboards. It took us by surprise. We realised that ours is a gifted child who has inborn talent and extraordinary memory power,” shares Mayur, a ship building engineer who is into photography, branding as well as computer engineering.

Atharv’s mother Shruti Nadkarni, a lecturer at G V Kare College of Law, remembers one of his childhood feats that completely zapped her. “At two Atharv could lock and unlock mobile phones with four digit number security code. It was then that we realised of his extraordinarily sharp memory power.”

Atharv who knows all Indian States’ and Union Territory capitals, world capitals, elements of periodic table, Newton’s laws, Pythagoras theorem, is currently learning Trigonometry which he enjoyed solving on the class blackboard after school hours to his senior KG friends though they do not understand a word. All they know is to coax him to tell spellings when they don’t know or to add a math for them.

“Atharv needs a stimulant all the time to keep him engaged. He is a hyper kid, hungry for knowledge. His brain just craves for knowledge and sometimes we are tired of answering his queries,” admits his grandmother Anuradha Nadkarni, a singer and stage performer who is Atharv’s best friend when it comes to story-telling or singing.

Atharv’s favourite books include World Atlas, quiz books, mathematics workbooks and autobiographies. He has already read the autobiography of Steve Jobs and Bill Gates. Older scientists like Newton, Einstein and Edison etc are among his favourites too. Well-versed in computers and mobile phones he can use these gadgets better than any average adult. He enjoys using the internet to find answers to all his queries regarding various subjects. There’s nothing on earth that does not interest him.

Atharv enjoys discussing on computers. He announces, “I like to do computer coding a lot. I watch YouTube videos to learn programming using HTML, CSS, JavaScript, jQuery, Python, Visual Basic Script tutorials etc. This is how I learnt to code. I designed this website using HTML and CSS and am thankful to GoDaddy for the domain and cPanel for the hosting. I completed an online coding challenge called ‘LightBot’ and also got a coding certificate for it. I love to use Scratch by MIT and Khan Academy. I would be learning Sanskrit too.”

Ask him if he means snake by ‘python’ and he quips, “No. Python is programming language developed by Guido van Rossum.” Not stopping at this he even spells this Dutch programmer’s name correctly with ‘v’ in small case. This little master plays his Yamaha keyboard and sings his old Hindi favourite numbers of Kishore Kumar, Lata Mangeshkar and R D Burman.

Atharv has a liking for English songs too. He sings The Beatles, Queen, Led Zeppelin, Pink Floyd while his father accompanies on guitar. Enjoying his summer vacations, Atharv’s evenings are reserved for playing outdoors and cycling. He will go for swimming too. Except for his thirst for learning more and more, he is just like any normal kid who loves chocolates and ice-cream.

Can mobiles be allowed in the classroom?

Think right for those who are left(ies)

Triumph of good over evil