Not that "maad" about it anymore

Maad, coconut feni, is losing a long battle to survive in modern Goa, due to economic and social reasons. 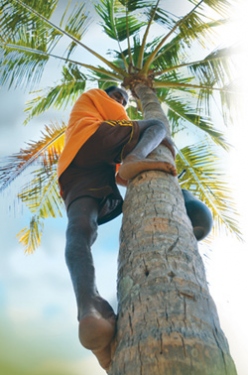 Agnelo Serafino Falcao checks on his toddy jar at the top ofa coconut tree near his house in Nagwaddo, Betalbatim. The morning air is dampperhaps indicating rain, a few hours away. Soon the tree trunks will be tooslippery to climb, and he will be relaxing on the little outcropping in frontof his house. Surrounded by fields and coconut groves. The toddy he collectswill be transported to a feni maker to ferment and distill. But gone are thedays, when toddy tapping and producing maad was a hectic affair. Today, it is alanguid affair.

“These days we collect not more than five litres at a time,a miniscule amount compared to almost ten times that amount in the eighties,”says the wizened tapper. Maad has been on the decline over the last 15 years.There was a time when many people preferred maad to cashew feni, due to themore acceptable odour. But the demand for toddy itself has gone down, apartfrom a smattering of maad producers, the only other people who require toddyare caterers who make sannas. That is where the fascination for maad ends.

The Henriques family, owners of Rhea Distilleries in Nuvem,were the first in Goa to bottle maad, creating a popular brand with ‘OldBarrel’ in the late 1960s. With 5000 bottles produced a month in themid-eighties, Old Barrel was easily Goa’s largest selling maad brandcontrolling almost 75 percent of the market. Sadly, in 2007, the family decidedto discontinue Old Barrel, due to a clear lack of quality in the toddyavailable, the low number of litres delivered by tappers and a few othernoticeable factors. “We would get toddy from various sources and then create ablend. But towards the end we realized that it wasn’t worth the effort,considering the amount of time and money we put in to produce a low qualityproduct,” says Reagan Henriques, whose father was the man responsible for OldBarrel.

It’s a lack of both supply and demand that is bringing maaddown. The number of toddy tappers has decreased rapidly, especially since thesecond generation of tappers are looking to other avenues of income, notcontent with the current job profile of climbing a few dozen trees for aroundnine months a year, for meagre pay. There is also the straining ofrelationships between the mundkar and bhatkar, “leading to many bhatkars whothen refuse to lease out their coconut trees to the tappers,” says an feniindustry insider. Then, there are the side effects, which is another reason whymany have stopped drinking coconut feni. Agnelo Falcao explains, “Most fenidrinkers are heavy drinkers and if you drink a lot of maad it drasticallyincreases your body temperature. It doesn’t harm your health but it makes youvery uncomfortable in a public setting.”

While maad does have a mention in the Geographical Indexnotification for feni, it’s the more popular cashew feni that is still goingstrong. For maad to make a comeback, it’s going to take more than just monetaryincentives for tappers. The industry needs a revamp. Falcao doesn’t soundhopeful. “The future is bleak,” he says with a shrug, as he picks up his jarand heads home.

Can mobiles be allowed in the classroom?

Think right for those who are left(ies)

Triumph of good over evil