WHAT PROMPTED CM Pramodbab Sawant to caution Goemkars against outside forces which he said were hell bent on creating disasters in the state?  Many a question remains unanswered – who are these outside forces the CM was referring to? What made the CM to make the statement at a time when the TMC is making entry into the state? Are these new forces really posing a disaster or are the local political players simply rattled by the entry of outstation players on the local turf. Or, is it simply a narrative being set ahead of the electoral battle. Wait and watch.

Job well done to hold back Reginaldo in Cong

HOW DID the Congress leadership manage to stop the irrepressible Reginaldbab Lourenco from leaving the party, is a question doing the rounds in Saxtti political circles. Is it the birthday diplomacy that helped bring all leaders together or was the backroom discussions and negotiations, involving leaders in Delhi, Bengaluru and Goa help pave way for Reginaldbab to stay put in the Congress? That none other than Rahul Gandhi called up Reginaldbab to wish him on his birthday in the presence of the Diggu-Girish duo is an indication that the Congress top leadership was kept in the loop about the mission. Any questions?

Now, who will Luizinho field in Cuncolim?

TMC LEADER Luizinhbab Faleiro is on the job to scout for candidates to contest the 2022 polls. The Congress veteran, who embraced Mamata Didi'sTMC has set his eyes on Cuncolim constituency. It's an open secret that Luizinhbab was one Congress leader who was rooting for bureaucrat-turned-politician Elvisbab Gomes for the Cuncolim ticket when he was in the Congress. Post-exit from the Congress, it remains to be seen how Luizinhbab goes about the job in Cuncolim in the selection of TMC candidate. Wait and watch.

Battle for Benaulim: All eyes on Churchill’s moves

WHERE'S VARCA strongman Bab Churchill was the question doing the rounds in Saxtti Countryside. Sources said the NCP MLA had reportedly headed to Mumbai earlier this week. It isn't clear whether he was on a personal visit or had any appointment with NCP bosses including Maratha strongman Sharad Pawar and the general secretary Prafulbhai Patel. Churchillbab’s moves are being closely watched by friends and foes. Daughter Valanka has started her campaign in Navelim, while all eyes are on Benaulim where the Congress will be entering Churchill’s home turf on Sunday. Wait and watch.

AHEAD OF the Benaulim block meeting scheduled for Sunday, a banner that has surfaced across Benaulim makes reading interesting. For, while the photos and names of Congress leaders, be it Sonia, Rahul and Priyanka Gandhi, Chidambaram, Dinesh Rao, Sardinha, Girish, Mickky, besides the  block president reflect on the banner, opposition leader Digambar’s name and photo is conspicuous by its absence. It's isn't clear how Digambar’s name and photo did not find a mention on the banner. Congress leaders are trying to figure out who the architect of the banner is.﻿ 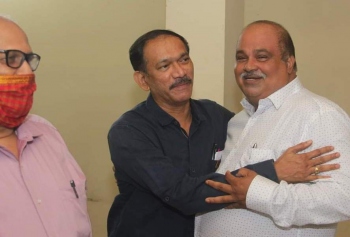