Why Cong took the Chennai flight

﻿Why Chennai? And what was the reason for the five Congress MLAs to take the late Friday night flight to the Southern state of Tamil Nadu. With the Maha Vikas Agadi alliance down in the dumps in neighbouring Maharashtra, the Congress High Command apparently opted for Chennai as a safe place for its legislators where DMK, an UPA partner, is in power. The game plan, sources say, was to foil all attempts to engineer a two-third split in the Congress on the eve of the Presidential polls and save embarrassment for the Opposition across the country. Any questions?

For a moment, political observers pinned their hopes on coal to keep the Congress flock together after the Assembly session on Friday. For, some of the Congress MLAs, who had come under scanner since Sunday last in their bid to join the BJP, partook in the protest against coal inside the House and outside. They were vocal against the government on the linear projects, only raising hopes that the MLAs may now see reason and change plans to embrace the saffron brigade. Their hopes, however, were dashed when realisation dawned that a fresh bid was made to form a two-third group to quit the party. Any questions?

Do the supporters of Congress heavyweight Aleixobab Sequeira have anything to say on speculations over plans by Congress MLAs to join the saffron brigade? Observers in Saxttidom wondered whether any of the supporters had found out from the Nuvem MLA the unfolding political developments in the Congress. Realising that the Nuvem MLA is not part of the five-member group of Congress MLAs, who were flown to Chennai to avert poaching, a group of Congress supporters now plan to call on their MLA to find out the ground reality.

Political observers have been trying to figure out whether it’s bonhomie or just coordination between Goa Forward chief Vijaibab Sardesai and Congress MLA Yuribab Alemao in the Legislative Assembly? For, the duo was seen coordinating on the floor of the House on a couple of questions including Cuncolim revolt. Once close family friends, relationship between Vijaibab and Joaquim and Yuri had turned sour after the father-son duo quit the Goa Forward to embrace the Congress party. Will the coordination on the Assembly floor help bury the hatchet and open a new Chapter? Wait and watch.

When Reginaldo was criticised for his silence

Independent MLA Reginaldbab Lourenco’s silence in the House when Opposition was on its feet to oppose coal gave an armament for his detractors to fire guns at him. Arch political rival Morenbab Rebello lost no time to take on Curtorim MLA head on. Political observers say the Opposition attack on Reginaldbab may be just the beginning after he extended support to the saffron brigade after the 2022 polls. Wait and watch how the Curtorim MLA handles the situation when he was the face and voice of many agitations including the anti-coal agitation.

AAP reminds media of its prediction

Many a scribe was left to wonder after the Aam Aadmi Party called for an urgent media briefing late last Sunday. Coming on a day when the Congress camp was in a tizzy over an imminent split in the party, scribes tried to figure out what exactly the AAP leadership was trying to convey at the dead of night, before realisation dawned that AAP state leaders had called for the briefing to remind Goemkars that prediction made by AAP supremo Arvind Kejriwal that a vote for Congress is a vote of BJP, has come true. Fishing in troubled waters? 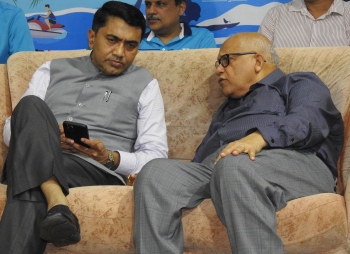