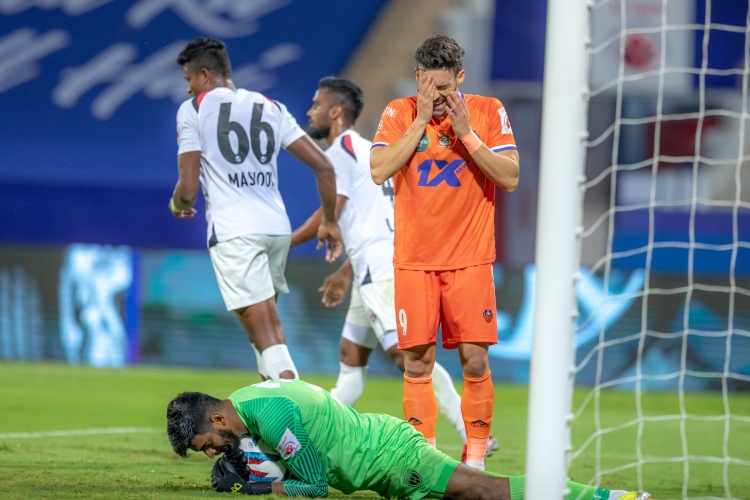 FC Goa frontman Jorge Ortiz put on a dazzling display but without any reward.

Some poor finishing and questionable refereeing decisions meant that FC Goa had to settle for a 1-1 draw against NorthEast United Friday night at the SAG Athletic Stadium in Bambolim.

The Gaurs were up against it from the beginning after Hernan Santana put the Highlanders ahead within 2 minutes of the start. The Gaurs though responded with much oomph and fashioned an equaliser before the break thanks to Airam Cabrera’s third of the season.

Derrick Pereira, though, would be left crestfallen as he saw his side spew a number of chances in the second half. By the end of the game, Goa had managed to record 25 shot attempts on goal and 67% of possession but couldn’t produce the telling moment of the game.

FC Goa head coach Derrick Pereira was forced into a number of changes as Edu Bedia, Seriton Fernandes, Naveen Kumar and Ivan Gonzalez failed to make the squad for this one. That meant a place in the starting line-up for Princeton Rebello, Leander D’Cunha, Alexander Romario Jesuraj and Dheeraj Singh Moirangthem. With Cabrera also making it, it meant that FC Goa had to call for five changes to their winning XI from their last game.

And the new looking line-up was rattled immediately as Dheeraj in the FC Goa was caught out by a marvellous long range strike by Hernan Santana from a free-kick. The early blow saw the Gaurs galvanise and respond in strong fashion. Within the next 10 minutes Alberto Noguera and Romario tested the NorthEast backline with shots on goals while Jorge Ortiz continued to look his menacing self all over the final third.  The 30-minute mark brought the Gaurs their first real chance as a fine move saw Romario get a shot off which Mirshad Michu managed to palm away. Ortiz was first to the rebound but failed to keep the shot down from close distance. FC Goa’s relentless pressure finally paid off in the 39th minute when Cabrera was able to direct his header at the far post across from a corner looping over everyone before nestling into the net.

The Gaurs continued to keep the pedal to the metal in the second half as they enjoyed large spells of possession and fancied chances every now and then. NorthEast, on the other hand, looked content to hit on the break.

Romario’s shot in the 48th minute - saved by the keeper - felt like a foreshadowing of what was to come in the following minutes. The second half saw Ortiz take centre stage as he time and again got into dangerous positions and forced the keeper to pull out some brilliant saves from his bag.

The Spaniard came closest to giving FC Goa the lead in the 73rd minute when Princeton found him in stride with a delightfully weighted chip ball. Ortiz, however, failed to test the keeper as his effort went wide.

The Spaniard would be left bemused yet again six minutes later, this time thanks to the referee. Goa seemed to have taken the lead when Makan Chothe bundled the ball over the line after a scuffle following Mirshad Michu’s poor attempt at saving Ortiz’s free-kick from distance. The referee though found a foul where there seemed to be none, disallowing what Goa thought could be the winner.

Goa kept pushing for all three points and the 93rd minute of the game presented them with one of the best opportunities of the game as Noguera found Cabrera with a delightful through ball. The forward’s first time finish though was not on target to trouble the keeper.

The draw means FC Goa jumps up to 8th on the table, overtaking Odisha FC with 13 points from their 11 games. The Highlanders, on the other hand, remain in 10th spot. The Gaurs will be back in action on January 19 when they take on SC East Bengal. The game is scheduled for a 7.30 pm kickoff.﻿﻿﻿ 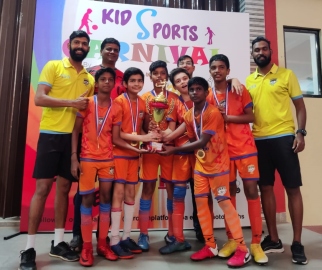 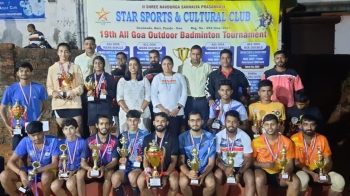 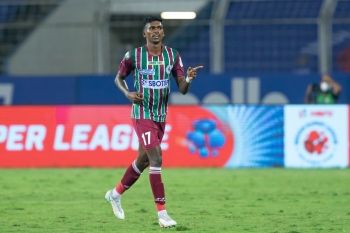