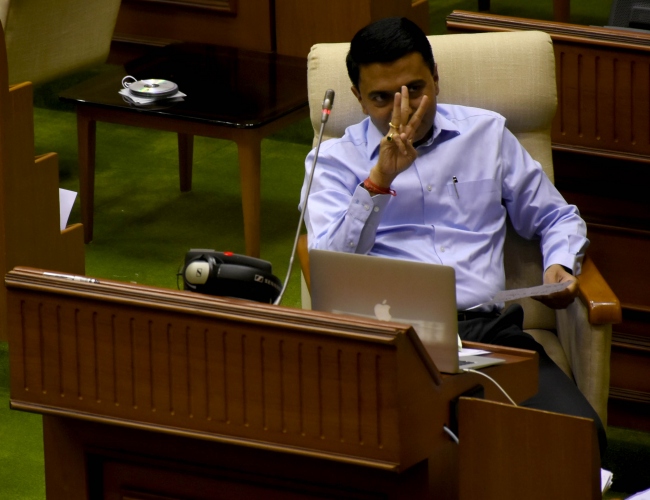 The State government on Friday stood firm and unmoved over its plans to go ahead with the three linear projects cutting through protected forests in Mollem and surrounding areas being widely opposed in the State.

Chief Minister Pramod Sawant told the Goa Legislative Assembly that these projects are "necessary" for the State's future needs and strongly denied any link to alleged plans for creating a coal hub.

"I again assure on the floor of the House that not one tonne more of coal than the current quantum will be increased," Sawant said in a bid to dispel fears that the projects are in reality meant to facilitate the coal transport corridor.

Sawant was responding to the debate and discussions on the private members resolution urging the government to scrap the three projects moved jointly by Goa Forward Party chief Vijai Sardessai and Curtorim MLA Aleixo Reginald Lourenco.

Sawant also accused members of the Opposition of changing their stance on the projects now that they were not in the ruling side.

Sawant said he will ensure that the quantum of coal currently handled will be reduced in future but the process will take time.

On environmental concerns, the chief minister said the issue is being studied by the Supreme Court appointed Central Empowered Committee (CEC) and all sides, including our government, have placed their positions before it.

Whatever outcome or report comes from this Supreme Court exercise will have to be accepted.

Earlier moving the resolution, Sardesai urged the government to forget the past procedures involved and who were responsible for granting the various permissions at various stages and take a firm decision to scrap all the three linear projects in the interest of Goa.

Pointing out that the Mollem National Park is among the UNESCO recognised eight hottest wildlife biodiversity hotspots of the world, Sardessai said it is incumbent on all to protect it for posterity.

"There is no justifiable reasoning to show benefits to the State or its people from these projects," Sardessai said, adding that it is therefore that a strong apprehension is gaining ground in the public consciousness that they are only meant to facilitate the coal transportation corridor between Mormugao Port and the steel industry in north Karnataka.

He said, there is a strong sentiment across Goa and not just in South Goa that these projects have to be aborted if Goa, its beauty and ethos is to be preserved, adding that the youth and the younger generation in Goa is up in arms against these projects.

"Those opposing them have through research, scientific appraisals and other well researched documentation exposed a number of violations and inadequacies in their environment impact assessments (EIAs)," Sardessai added.

Lourenco came down heavily on the government for failing to choose the best of the eight route options with regard to minimal environmental damage provided by the Central Electricity Authority (CEA) for the 410 KV Tamnar power transmission line project.

"You were given eight alignment options with the first one being the best. Why did you not choose that one?," Lourenco asked.

On the South Western Railways' double tracking project, Cortalim MLA Alina Saldanha deviated from the trend of MLAs going on party lines and made an impassioned plea to the government to drop the project for double tracking of SWR.

In an emotion choked tone, Saldanha narrated the trouble faced by people living in villages of her constituency along the SWR track due to noise pollution and also coal dust.

Opposition Leader Digambar Kamat urged the government to respect the sentiment of the people of Goa which is strongly against the projects.

"Just as you have respected the sentiments of the people of Melauli and scrapped the IIT project, scrap these projects too," Kamat said.

Several other Opposition MLAs, including Rohan Khaunte, Churchill Alemao, Luizinho Faleiro, Sudin Dhavlikar among others also voiced arguments in favour of the resolution urging the government to scrap the projects.

Alemao said coal and tourism cannot co-exist and demanded that the government drop the projects.

From the government side, in addition to Sawant, Power Minister Nilesh Cabral and PWD Minister Deepak Pauskar also defended the decision to go ahead with the projects while denying that they were meant to facilitate coal transportation.