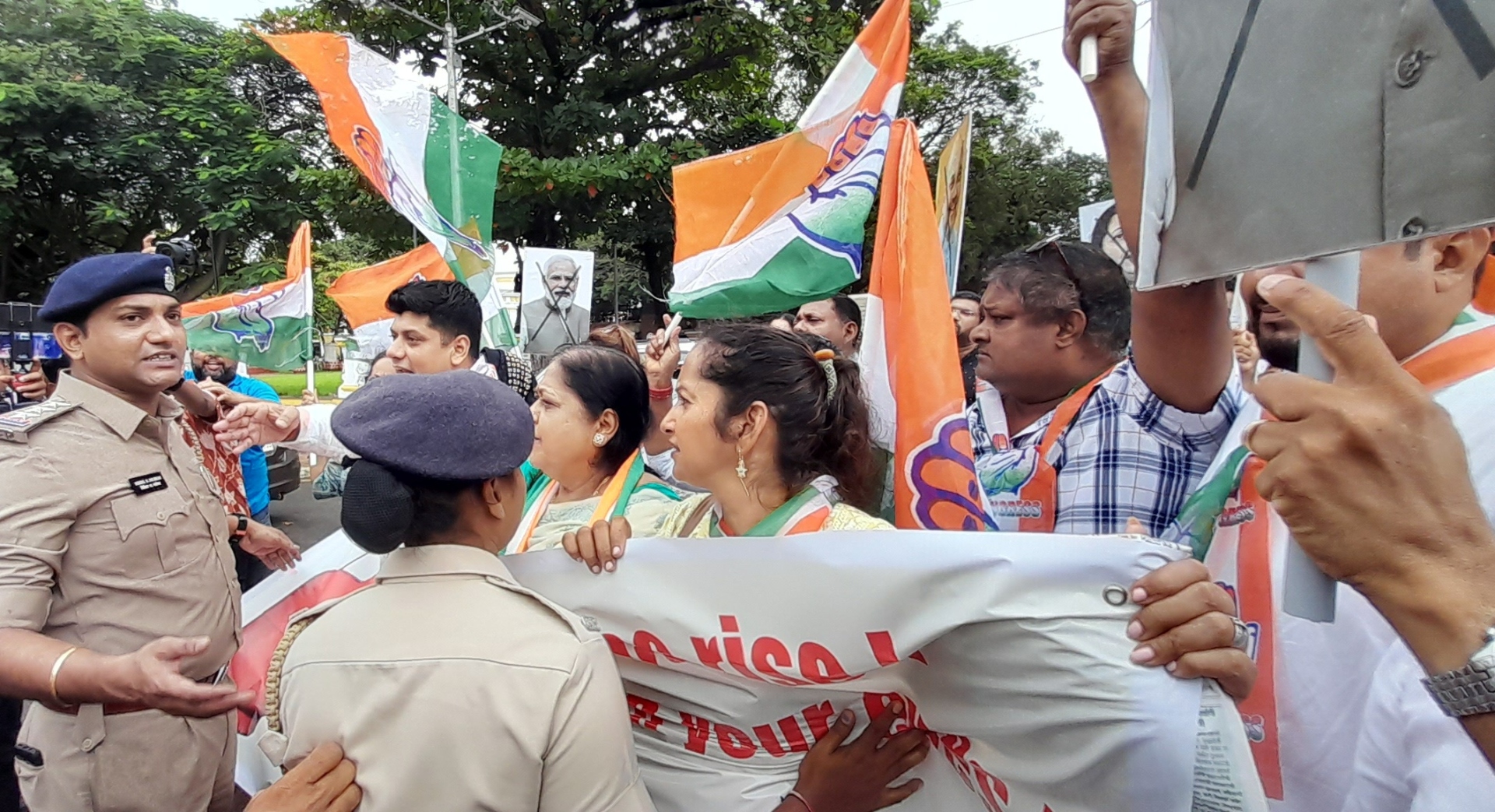 Congress leaders, including GPCC president Amit Patkar and Mahila Congress chief Beena Naik along with 12 others, were detained by the police as a protest march was held by the party in Panaji against price rise, unemployment, Agnipath scheme, and GST on essential commodities on Friday.

They were later produced before the Deputy Collector and released on personal bonds of Rs 5,000 each.

The protest started at the Congress house with the leaders and supporters shouting slogans against the BJP government. However, as it reached the Cafe Real junction along the M G Road, the protestors sought to proceed further towards the road leading to the Church, but the Panaji police stopped the protestors and told them to go towards the Azad Maidan and continue their protest there.

As the protestors refused and continued shouting slogans against the BJP government, right in the middle of the road, the police decided to detain the protestors as the traffic got blocked.

Later, the protestors including Patkar, Naik and 12 others were taken to the waiting police bus. But before they could get onto the bus, both Patkar and Naik slammed the BJP government for trying to finish the Opposition in the country.

“Today, we protested nationwide against the BJP government but police have been used to silence the Opposition and our detention is an example. The government wants to finish Opposition in the country so that issues like price rise, GST, etc do not get highlighted,” Patkar informed.

“Out of fear of the BJP government, the people are afraid to speak,” he added and informed that these very people will teach them a lesson when the time is right.

“The one who speaks against the BJP government has to face atrocity. Is this democracy or dictatorship where we are not even allowed to raise our voices?” Beena Naik posed while slamming the dictatorial attitude of the BJP government.

Even as the Congress leaders organised a protest against the BJP government over price rise, unemployment, Agnipath scheme and GST on essential commodities, only one MLA - Carlos Ferreira - participated in the same.

There was no sign of any other MLA even as GPCC chief Amit Patkar tried to shrug off questions from the media over the absence of its other 10 MLAs.

“I have told them that the protest will be organised at 11.30 am, they will be coming. But the burning issue today is price rise as it affects everybody including the journalists. Aren't you all affected due to the petrol being increased to Rs 97/litre?” Patkar posed.

On persistent questions by the reporters on the non-absence of other MLAs, Ferreira said, “You were telling me many times that these many MLAs are leaving the party but to date, nobody has left.”

On the protest, Ferreira said that people are suffering as the prices are increasing.

When questioned why the people are not hitting the streets on the price rise, Ferreira said that they are afraid of being harassed later.

All 16-B cases to be scrapped too

Locals are lords of clams, oysters in Chicalim Bay

Five years on, detention centre for foreigners in dire straits