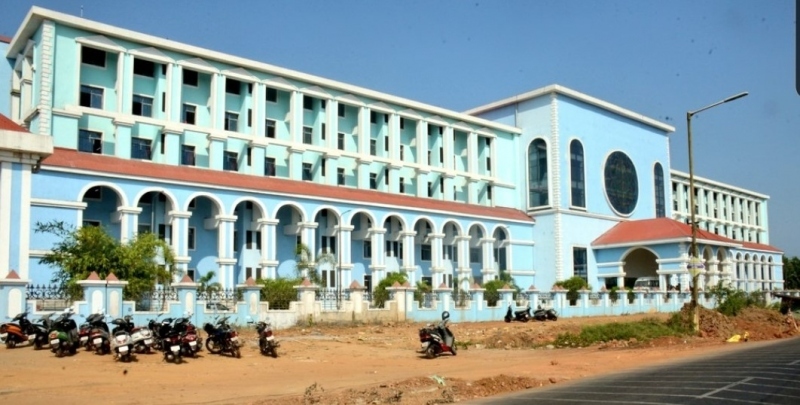 ﻿MARGAO
With the demand for beds far outweighing supply, the same old question has come to the fore again - why has the government and the health administrators not set in motion the process to open the top two floors of the South Goa District Hospital for Covid patients?

Officials in the know say the top two floors, which were designed for a nursing institute, but is now being proposed for setting up of a private medical college, can easily accommodate 200-odd patients at any given time, a situation which may help meet the growing bed requirement.

The South Goa District Hospital was initially designed as a 800-bed hospital, before the BJP government in 2012 decided to utilize the top two floors for a nursing institute, while the present government has set its eyes on these floors to set up a private medical college.

An official told 'The Goan' the top two floors can easily accommodate patients if an oxygen supply line is connected to these floors and adequate changes are made in the interior to accommodate beds.

In fact, the official said the government should take a quick call on converting the district hospital’s top two floors for Covid patients since the bed situation has already turned worse with over 100-odd patients lining up outside the hospital seeking admissions every day.

“As fears are raised across the country that Covid spike may take alarming proportions throughout May, the government should immediately take a call to utilize the South District Hospital’s top two floors for Covid not just to take care of the second wave, but the third wave as well. All that the government need to do is to connect a oxygen supply line. These floors can also be utilized as a step down facility on the lines of the ESI hospital for the moment”, the official remarked.

He added: “Though the top two floors were designed for a nursing school, with cubicles for lecture rooms, the government need not effect any internal changes and straight away set up beds to house the patients”.

An official of the Goa State Infrastructure Development Corporation (GSIDC) told 'The Goan' that the top two floors have around 21 urinals and over 46 wash rooms, which can easily meet the sanitary requirements of the patients.

The health official said the bed position at the South Goa District Hospital is a cause for concern.

On Monday, around 500-odd patients sought treatment in the hospital. The official, however, said by evening around 100-odd patients could line up for admissions, which cannot be met under the prevailing circumstances. “Around 40 patients are discharged on an average per day, but the situation is such that the admission rate is higher, resulting in bed shortage”, he added.

Leader of Opposition Digambar Kamat sought to know why the district authorities, which tried to bulldoze its way by requisitioning the Presentation Convent Higher Secondary school for Covid patients, is still reluctant to utilize the two floors of South Goa District Hospital. “Patients are facing hardships for want of beds and oxygen. When the two floors are lying vacant and the government is looking out for space, this space should be immediately utilized to house patients”, he demanded.

GPCC Chief Girish Chodankar said the pro-crony capitalist BJP government has not taken any steps to utilize the two vacant floors of South Goa District Hospital, as the government still wants to hand it over to the private players for setting up of private medical college. Patients are made to sleep on floors, stretchers and some are given treatment on chairs”, he said.

“This makes it convincingly clear that the doctors, nurses, healthcare workers and patients are sandwiched in the political fight between the Chief Minister and the Health Minister. The government is in complete denial mode about non-availability of beds and oxygen”.

Oxygen enough for next 2-3 days
at District Hospital, says official

Officials said that oxygen supply to the South Goa district hospital should hopefully stabilize once the Cuncolim Oxygen plant starts supplying medical oxygen. “The situation should further improve  later this month once the government sets up an oxygen generator plant at the district hospital under the PM Care fund”, the official said.