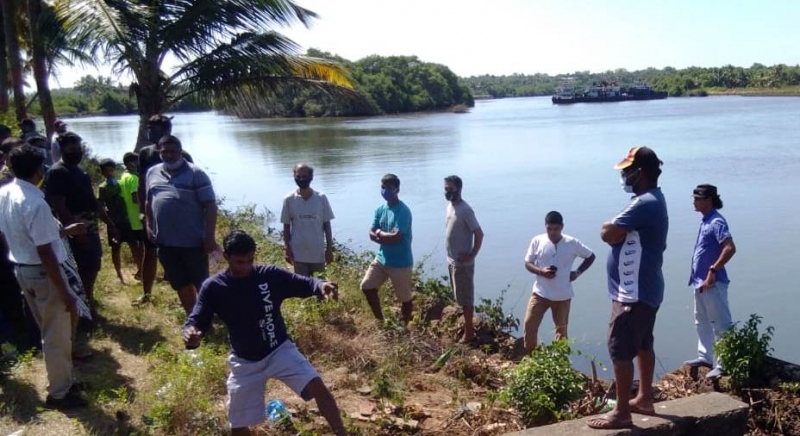 Residents of Codeadwaddo-Chinchinim holding a meeting on the banks of River Sal.

MARGAO
A storm is brewing over the River Sal, the lifeline of Salcete, after a dredger made its presence in the river to carry out desilting, even as the traditional fishermen have red-flagged the work by calling upon the Captain of Ports to immediately revoke the work order.

Even as the dredger appears moving in the direction of Orlim to take up the work of dredging along the six-km river Sal stretch, the AVCB Traditional Fishermen Association, representing the fishermen on the banks of Assolna, Velim, Betul, Chinchinim and Cavelossim, has shot off a letter to the Captain of Ports not to carry out any dredging or desilting work without consulting the fishermen and obtaining their consent.

What has raised concern amongst the traditional fishermen is that proposed work is not just desilting, but a case of “Capital dredging”  since the river depth in most part of the Varca-Telaulim bridge stretch has always been much less than three meter,  especially along the “bhats” (mudflats), where shell fish and other fish species breed and flourish.

In the letter addressed to the Captain of Ports, Association president Agostinho Furtado said the attempt to call the capital dredging as “desilting” is a clear case of fraud and criminal violence against the fisher folk community of River Sal, especially when there has been no information shared with the stakeholders nor have been they been consulted in any manner.

That’s not all. The Association pointed out that the subject activity of dredging to a three meter depth amounts to capital dredging and hence is in gross violation of the EIA notification, 2006 and the Environment Protection Act, since no environmental clearance has been obtained before commencing the work.

Terming the dredging a direct assault on the livelihoods and lives and is being done in gross violation of Article 21 of the Constitution, the Association further said the activity is a gross violation of the Coastal Zone Management Plans prepared by the fishermen and other villagers along with the respective village Panchayats. “These plans clearly and accurately demarcate the fishing, fish breeding, shell fish breeding and other ecologically sensitive areas of the river, but have not been considered in the tender notice which is for fixed dimensions of three meter depth, 12 m width and six km length”, the petition stated.

Pointing out that the tender notice clearly states that the dredging is to facilitate free movement of vessels, the Association said this only indicates that the river Sal, which is highly sensitive ecologically and is under grave assault due to urbanization and industrialization of the watershed, is to be destroyed for shipping by converting the river into a lifeless shipping channel.

“It is most unacceptable that the fisher folk, who are the caretakers, occupants and owners of these resources held in common for thousands of years, have not been informed about the plans to dredge our river. We know and own every inch of this river and your attempt to interfere with her without informing us is gross contempt of Article 19 of the Constitution, the United Declaration of the Rights of indigenous peoples and Goa Panchayat Rat Act”, Furtado added.﻿﻿