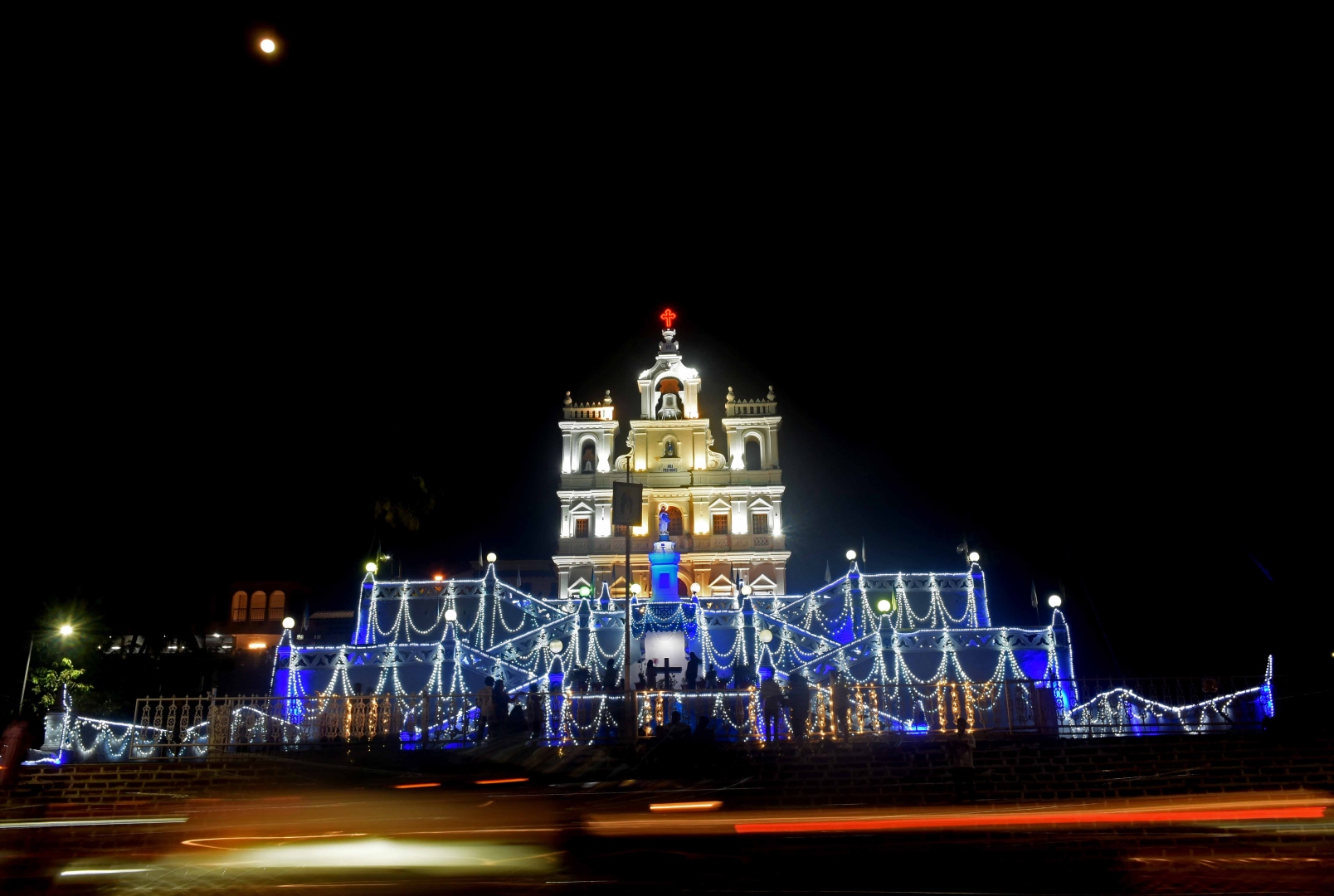 Our Lady of Immaculate Conception Church, Panaji is lit up on the eve of the feast.

The feast of our patroness, Our Lady of Immaculate Conception, evokes in the parishioners of Panaji an immense joy coupled with religious fervour.

The Immaculate Conception of Mary, who later became the mother of God, is a dogma of faith proclaimed by Pope Pius IX through his Apostolic Constitution, Ineffabilis Deus (God Ineffable), promulgated on December 8, 1854. The official statement is made in categorical terms: “We declare, pronounce and define that the doctrine which holds that the Most Blessed Virgin Mary, in the first instance of her conception, by a singular grace and privilege granted by the Almighty God, in virtue of the merits of Jesus Christ, the Saviour of human race, was preserved free from all stain of original sin, is a doctrine revealed by God, and therefore to be believed firmly and constantly by all the faithful.” This dogmatic pronouncement, made ex Cathedra is found towards the end of the papal document. It is an infallible magisterium.

Ninety-six years later, on November 1, 1950, another Marian dogma of the Assumption of Blessed Virgin Mary, body and soul, to heaven was defined by Pope Pius XII by his Apostolic Constitution, Munificentissimus Deus (the most bountiful God).

The same Pope Pius XII through his encyclical letter, Fulgens Corona (the radiant crown), proclaimed a Marian Year 1953 to commemorate the centenary of the promulgation of the dogma of the Immaculate Conception. And, recently, the dogmatic constitution, Lumen Gentium (1964), the Light of the Gentiles, reiterated the doctrine of Mary’s immaculate conception wherein it stated that the early Fathers of the Church called the “Mother of God entirely holy and free from all stain of sin, as though fashioned by the Holy Spirit and formed as a new creature.”

Being the patroness of our Panjim Church, and to celebrate in a worthy manner the feast in her honour, we planned a 9-day preparation called Novena. The theme of the Novena centred on the theme, “Following Jesus, like the Blessed Virgin Mary, let us foster Communion, Participation and Mission.” It is drawn from the theme of the Synod which is due to take place at the Vatican in October 2023. The main theme was split up into nine sub-themes related to the Pastoral Letter of the current year.

During the Novena, the Word of God was proclaimed by the Jesuit priests in English at the morning Novena Mass and in Konkani at the evening Mass. Each day of the Novena Mass was allotted among 20 parish zones that organised and participated in the liturgy.

The little children, draped in angels’ vestments, sang the hymn, “Noman, Noman Rannie.” The angels walked processionally down the aisle of the Church led by a flag-bearer, and others carrying the sprinklers and trays of the petals which were then deposited at the feet of the statue of Mother Mary. The Confrades, men and women, wore Opa (red in colour) and Murça (white in colour) with the President of the Confraria carrying a sceptre, who also joined in the procession.

On the feast day, seven Masses from 5.30 am to 5.30 pm are scheduled to provide opportunity for peoples’ participation who come from different places. While three Masses will be held inside the Church, four Masses will be held in the open air. Rev. Dr. Henry Falcão, Director of St Joseph Vaz Spiritual Renewal Centre, Old Goa, will preside over the solemn Eucharistic celebration and proclaim the Word of God. The Feast Day Masses will be animated by the Church associations.

On this joyous and grace filled day, we invoke the intercession and blessings of Mother Mary on our parishioners and peoples from all walks of life.