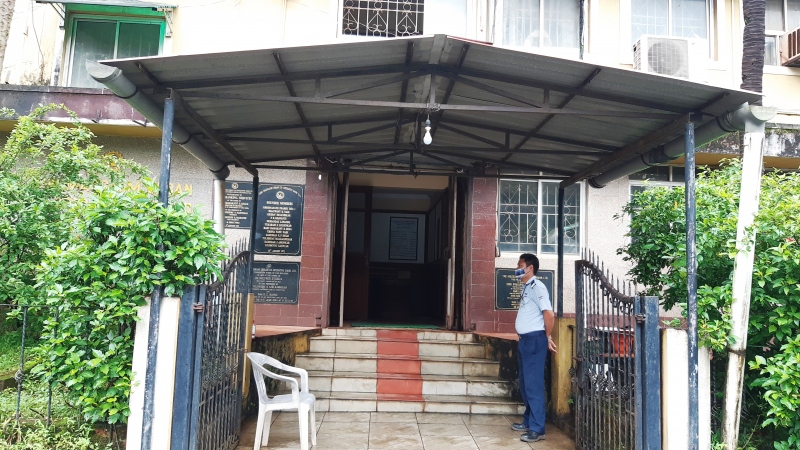 A lone security guard the entrance of the MUCB headquarters at Aquem.

MARGAO
The figures speak for itself. Madgaum Urban Cooperative Bank’s (MUCB) total deposits as on July 29 stands at Rs 189.81 crore, while the liquid cash available with the Bank as on the same date is pegged at Rs 122.32 crore.

As the debate rages over the reasons behind the collapse of the Margao-based Cooperative Bank, following the cancellation of the banking license by the Reserve Bank of India (RBI), depositors have a simple question or two for the bank management – where will the bank get the balance Rs 67.49 crore from to pay back the depositors who had banked with the bank over the years.

The depositors had been in the recent years pointing accusing fingers at the management for mismanagement of the financial institution, which in turn has partly attributed the collapse of the bank to the cumulative effect on mining activities since the ban in 2012.

With the RBI cancelling MUCB’s banking license, with effect from July 29, the focus now is centered on the government to appoint a liquidator and set in motion the bank liquidation process and pay back the account holders their deposits.

The MUCB had around 56635 depositors, with total deposits pegged at a whopping Rs 189.81 crore. Statistics reveal that of the total depositors, around 55,999 did not exceed the Rs five lakh figure, and they are all entitled to receive the amount under Deposit Insurance and Credit Guarantee Corporation (DICGC) as the ceiling for claims is fixed at Rs five lakhs. This implies all depositors whose deposits do not exceed Rs five lakh will receive their money as and when they put forth their claim with the liquidator.

Officials said the balance 636 depositors with deposits exceeding Rs five lakh and above too can look forward to receive their deposits up to Rs five lakh as they are entitled for insurance cover on the amount up to Rs five lakh. The total amount of deposits of the balance 636 depositors is pegged around Rs 59.12 crore. Considering they are covered under the Rs lakh insurance cover, which works out to Rs 31.80 crore, the question that remains unanswered is how the bank will arrange the balance funds amounting to Rs 27.32 crore to clear the money of all the depositors.

A glance the statistics reveal that of the 56635 depositors, around 42622 are small time depositors, whose deposits do not exceed Rs 1000 figure. The total deposits of this group are pegged around Rs 6.86 crore.

The second major component of deposits are those whose deposits cross the Rs five lakh figure, with deposits pegged at a whopping Rs 85.76 crore.

Bank banks on disposal of
assets to generate money

He added: “As far as the balance depositors are concerned, the bank has in its possession the assets which were attached of the loan defaulters. Just before the RBI cancelled the license, the bank was in the process of disposing attached assets, which could have brought revenue of Rs five crore. Similarly, we have other assets, which have been attached of the defaulters. It is now for the liquidator to take the process forward”.

Amonkar pointed out that MUCB has assets of its own, including buildings, which has the potential to fetch revenue amounting to over Rs 20 crore. “The bank’s outstanding loans amount to around Rs 50 crore. Nearly half of this amount was advanced to the mining sector.

Critics, however, say the bank does not speak about the ground reality and is pinning hopes on the revenue that will come by disposing off bank’s assets and attached properties. “What if the assets do not fetch the projected value in the market”, remarked a critic.

MARGAO: Former MUCB official and shareholder Chandan Nayak has reiterated his demand for an inquiry into the role of all bank chairpersons, present and past, behind the collapse of the cooperative bank.

Chandan, who became a bank shareholder in 2017 after his retirement, recalled he had raised his voice against the bank management headed by then Chairman Ramakant Angle. “I had told Angle that the bank lies in the danger zone, but they did not listen. I had demanded a CBI inquiry into the investments amounting to lakhs of rupees with IDBI. They did not pay heed to my request”, he said, while reiterating his demand for a CBI probe into the bank.

>> The bank does not have adequate capital and earning prospects. As such, it does not comply with the provisions of section 11(1) and section 22(3) (d) read with section 56 of the Banking Regulation Act, 1949

>> The continuance of the bank is prejudicial to the interests of its depositors. The bank with its present financial position would be unable to pay its present depositors in full

MARGAO: Of the total nine branches of Madgaum Urban Cooperative Bank across the state, the Curtorim branch was very popular with the people of Curtorim and neighbouring village.

Reason: The branch was operating during the weekends, including Sundays, giving a facility for the small depositors, including farmers and vendors, to deposit their hard earned money in the bank.

News of the cancellation of MUCB’s banking license has come as a shock to the depositors, who now are pinning their hopes on the liquidator to get their money back.

President of local Tenants farmers Association, Milagres Menezes said around Rs 6.80 lakh belonging to the Association is blocked in the bank. “We want our money back. Hope the government immediately appoints a liquidator to settle our claims”, he said.

Curtorim MLA Reginaldo Lourenco said since the government will appoint a liquidator, people will have to brace up to file their claims. “We will take all steps needed to ensure the common man get their hard earned money”, the MLA added.