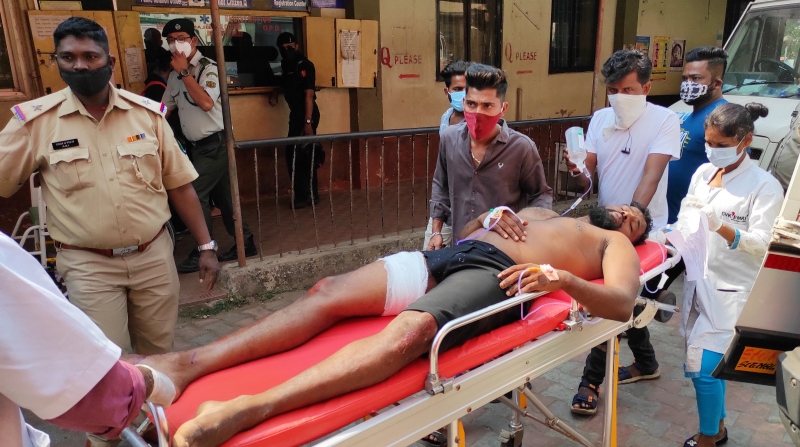 ﻿MARGAO
Blood was spilled and gunshots fired as armed criminal gangs battled it out on the streets of Fatorda near the Arlem circle in broad daylight on Tuesday noon, less than half-a-kilometer away from the Fatorda police station.

Thanks to an alert Superintendent of Police, Konkan Railway police station, Sammy Tavares, history-sheeter Sheikh Anwar alias Tiger Anwar survived an attempt on his life after he was attacked by a rival gang.

Anwar, who sustained a gunshot injury on his thigh, besides other injuries, was rushed to the Hospicio hospital, from where he was shifted to the Goa Medical College and Hospital, Bambolim.

A big-size koita and a country-made pistol were freely used in the gang war as evident by the recovery of the koita and an empty cartridge from the crime spot. A bullet is believed to have hit Anwar on his thigh, the police said.

The Fatorda police have arrested one person Ricky Hornekar, a resident of Curchorem, and are on the lookout for the remaining assailants, including Imran Bepari (Chimbel) in connection with the incident.

The filmy style incident occurred at around 1.15 pm on Tuesday near the Arlem circle when a group of 4-5 persons were seen chasing the dreaded gangster, against whom a host of criminal cases, including attempt to murder, stands registered at various police stations.

As an exhausted Anwar rushed on the main by-pass road with the assailants in tow, senior Goa police officer, SP Sammy Tavares, who was passing by at the same time, averted what many believed may have ended in a bloody murder.

After SP Tavares raised an alarm, three of the assailants are believed to have made good their escape, while two were on the hot chase of the injured gangster. Of the two, one managed to flee from the spot, while the other accused was nabbed by SP Tavares and his driver Irshad Sheikh when he jumped into a roadside nullah.

Sub-divisional Police Officer, Margao, DySP Harish Madkaikar, informed that the victim had received a bullet wound on his thigh, beside other injuries. “The police have nabbed an accused Ricky Hornekar and are on the look out for the remaining assailants,” DySP Madkaikar said.

Fatorda police station in-charge, PI Kapil Nayak said the police have so far recovered the koita which was carried by the accused. He said the accused must have used a country-made pistol as evident by the recovery of an empty cartridge and the bullet wound sustained by the victim.

He said the police have identified the remaining accused persons, whose names were given as Imran Bepari (Chimbel), Vipul (Khareband) and Amit (Quepem). He said the police would register a case of attempt to murder and offence under the Arms Act against the accused.

The SP said the accused assaulted the victim with iron rod, Koita, danda and one of them fired a bullet causing him serious injuries on knee, thigh, head and right arm.