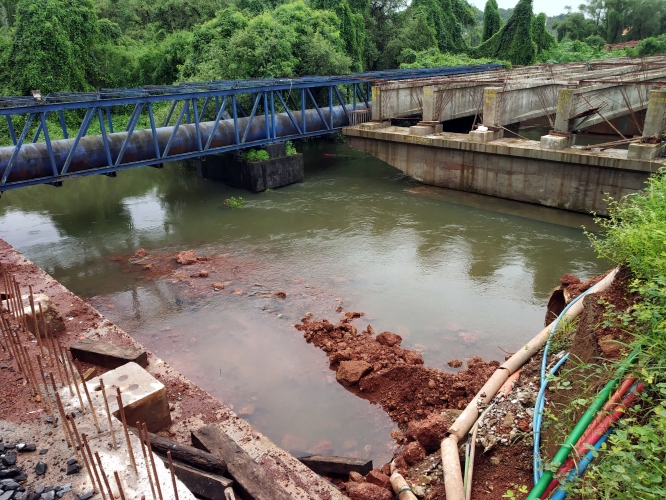 ﻿MAPUSA
The MVR Infra Pvt Ltd engaged in the ongoing work of expansion of the NH66 has once again proved to be a hard nut to crack.

The contractors of MVR Infra have gone ahead and began work to construct the culvert across River Tar without removing the debris from the site as promised, causing much heartburn amongst the locals and councillors in Mapusa.

With the pressure of the deadline to complete the ongoing expansion of the NH66 by December 19, the contractor has been in a tearing hurry to complete the widening of the highway.

During a recent protest against the non-removal of the debris below the culvert, the locals and the councillors were assured that all the debris under the culvert of the River Tar would be removed before placing the pre-stressed concrete reams for construction of the culvert.

Soon after the protest, the MVR contractor employed some JCBs on the site indicating its intention to remove the debris.

But locals informed that the contractor managed to pull a fast one on them as only the uppermost layer of the debris was removed while the major part of it in the river wasn’t touched.

They further said that the contractor then quickly placed the pre-stressed concrete reams on one side of the culvert.

The agitated locals and councillors once again gathered at the spot on Tuesday and stopped the work on the other side of the culvert with a warning to clear the entire debris in the river.

Local councillor, Prakash Bhivshet, said people have faced a lot of problems because of the silt and debris that has accumulated in the river which has also resulted in flooding of Guirim and Bastora villages.

“A lot of concrete debris has accumulated in the river while work of the culvert was going on. The contractor had assured us that all the debris would be removed first and only then the culvert work would be completed. We have no intention to stop the highway work. We only want the contractor to keep his word and remove the debris,” Bhivshet said.

Concurring with her colleague, Mapusa Municipal Council Chairperson Shubanghi Vaigankar said the contractor should remove the debris and then only carry on with the work of constructing the culvert.

“We have not stopped the national highway work. Our only request is to first remove the debris dumped in the river at the site of the culvert and then carry on with the construction of the culvert,” Vaigankar said.