Our Lady of Fatima: Model for Catholics in Goa 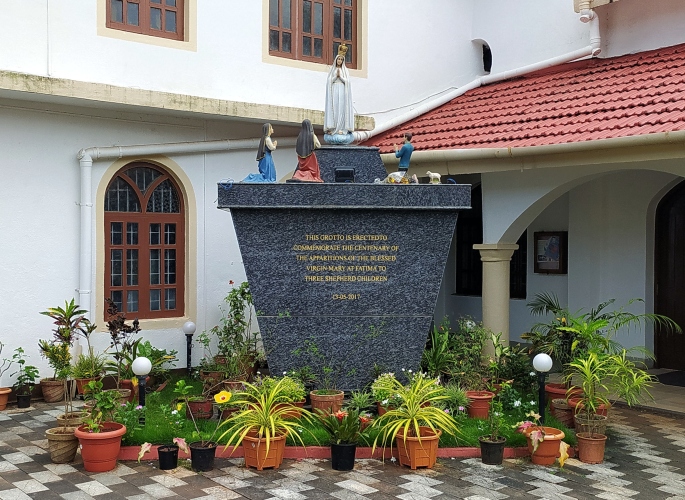 The Grotto commemorating the Apparitions of the Blessed Virgin Mary to three shepherd children at Fatima, Portugal has been erected at the Holy Family Church in Alto-Porvorim.

The 104th anniversary of the Apparitions of the Blessed Virgin Mary to the three shepherd children at Cova da Iria in Fatima, Portugal will be celebrated on October 13, 2021.

On this day, the Catholic faithful commemorate the final apparition of the Blessed Virgin Mary at Fatima and hence, she is known as Our Lady of Fatima.

In Goa, Catholics and others have a special devotion to Mother Mary. The feast of Our Lady of Fatima is celebrated with great religious fervour in May and in October.

The feast on October 13 is very dear to people in Panaji and is celebrated with great religious fervour. It is an old tradition to celebrate the feast with an open air Mass at the Archbishop’s House, presided over by the archbishop-patriarch.

Parishioners from Panjim and faithful from neighbouring parishes usually participate in this celebration. After Mass, the statue of Our Lady of Fatima, decked with flowers and mounted on a vehicle, goes in a candle-lit procession, wending its way through Fr Agnelo Road, culminating in the Church. The procession is considered a penitential procession and along the way, the people pray the Rosary interspersed with singing of Marian hymns.

At the steps of the Church, a large crowd is gathered and the Blessed Sacrament is exposed for veneration. An Act of Consecration of the Panjim parish is made, followed by the benediction.

This tradition has, however, been temporarily suspended since 2020 due to the Covid pandemic and the celebration will take place in a subdued manner, with limited physical presence and participation of the faithful in the religious services.

The first apparition took place on May 13, 1917. The Blessed Virgin Mary called the children on six consecutive times, the 13th of each month, the last apparition being on October 13 when she revealed to them her identity as “the Lady of the Rosary.” She requested them to pray the Rosary everyday to attain peace and to bring to an end the First World War.

The siblings, Francisco and Jacinta, passed away, untimely, two years after the vision, due to widespread influenza in Europe. Francisco died on April 4, 1919 while Jacinta died on February 20, 1920. Both of them were re-buried in the Basilica of Fatima, Jacinta in 1951 and Francisco in 1952.

Francisco and Jacinta became the youngest in the history of the Church to be beatified in the great Jubilee Year 2000 by Pope St John Paul II, and later canonised as saints by Pope Francis in 2017 to mark the 100th Anniversary of the Apparitions.

Lucia joined the Carmelite Convent of Santa Teresa in Coimbra in 1948 and witnessed the beatification ceremony of her cousins in Fatima in 2000.

Sr Lucia passed away on February 13, 2005, and was buried in the cemetery of the Convent. She was later re-buried along with her cousins and fellow seers in the Basilica of Our Lady of the Rosary.

In 2008, Pope Benedict XVI waived off the 5-year waiting period to start the process of Sr Lucia’s canonisation. In 2017, she was declared “Servant of God.” The cause of canonisation of Sr Lucia has now come to an end and the documentation has been submitted to the Congregation for the Causes of the Saints in Rome.

As we celebrate the feast of Our Lady of Fatima, we expect to walk in the footsteps of Mary, who stands atop as an outstanding model of Christian life for us, earthly pilgrims.

Like her, may we experience the joy of Christ and share it with others, particularly by helping those in need with love and mercy, by rising “in haste” to reach out to others.

Lastly, we implore her maternal intercession to end the current Covid pandemic and to restore to us the times of sound health, joy and celebration to the honour and glory of the Almighty.