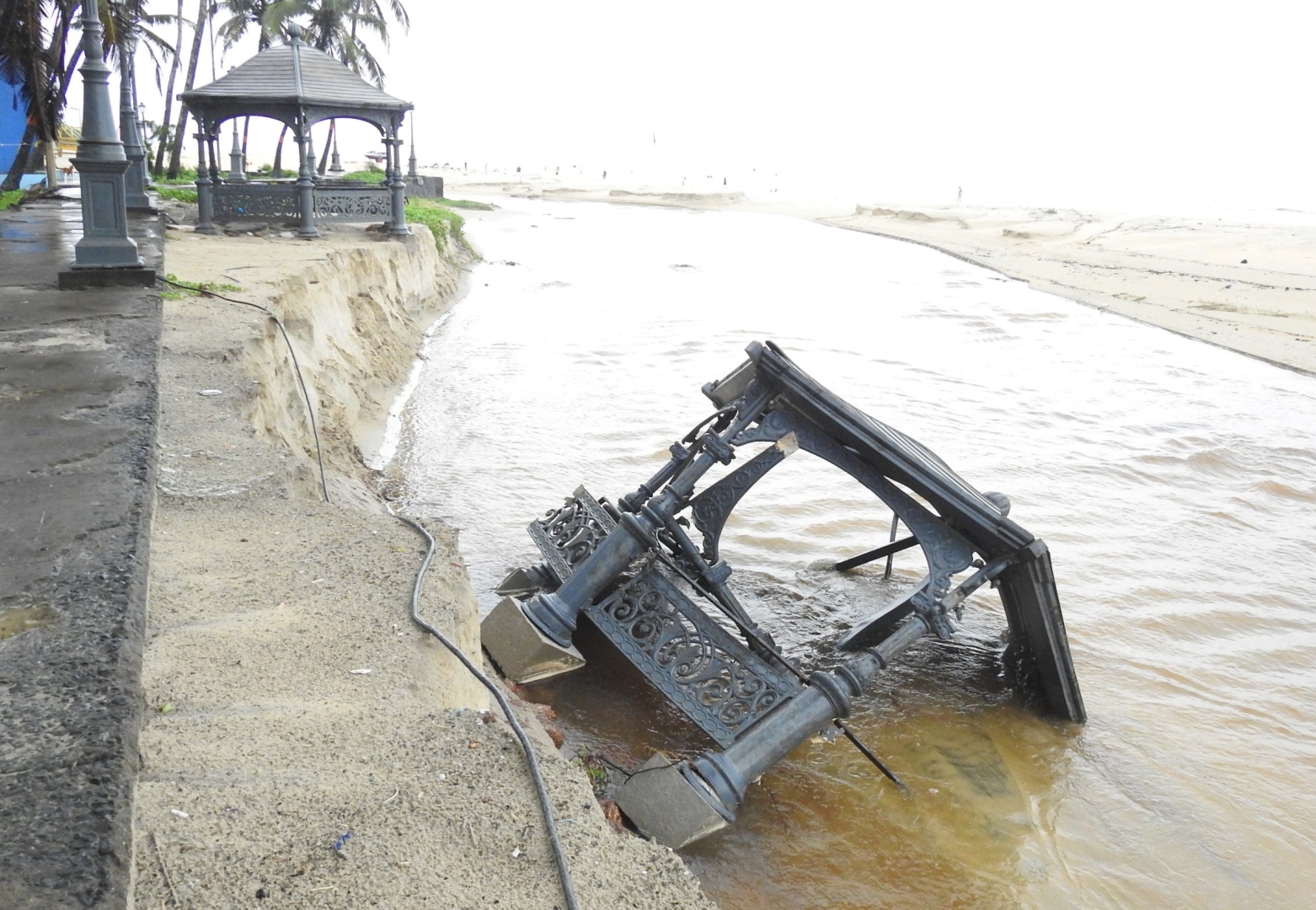 ﻿MARGAO
Hazard a guess how many district disaster management authority officials have descended at the world famous Colva beach to take stock of the sea erosion that has hit the beach in an unprecedented manner this season?

Pose this question to the local residents of Colva and aptly comes the reply they did not come across any officials descending at the beach to take stock of the sea erosion.

Incidentally, The Goan had first highlighted the sea erosion at Colva beach around 10 days ago, just when the rains had pounded the State.

In fact, on June 23, the newspaper had reported how erosion had hit the world famous beach in the early days of the rains.

The erosion was so intense that the creek waters changed its course and headed towards the northern side, to the side of the children’s park and beyond, instead of entering the sea.

In fact, on June 26, the newspaper again reported that the soil erosion is posing a threat to the lamps and gazebos installed on the beach as part of the beach beautification plan under the Central-government scheme.

While the locals feared that the worst would befall at Colva, given that the nature’s fury was at its peak, they claimed that none of the officials came to inspect the beach for an on the spot study of the situation.

On July 1, one of the gazebos crashed into the waters, while the sea erosion left cracks on the retaining wall, which was reported by the The Goan on July 2, the day when local Benaulim MLA Venzy Viegas got Tourism Minister Rohan Khaunte to inspect the place and save the beach from further erosion.

Incidentally, the Tourism Minister was candid in admitting that the issue at hand not only affects the beach and tourism, but an issue which requires coordinated action by the district disaster management authority headed by the Collector, the Goa Coastal Zone Management Authority and the Water Resources Department.

After the inspection, the Tourism Minister has promised to draw attention of the South Goa district Collector to initiate steps to contain erosion with the help of line departments including the Water Resources Department.

Local fishermen pointed out the short-term measures should be put in place by the authorities on top priority during the dry spell before further damage is caused to the coast.

MARGAO: Traditional fisherman Domingo Rodrigues has said the sea erosion that has hit the Colva beach this monsoon, is unprecedented in nature and has taken place after around four long decades.
Sounding a note of caution, Domingo said the damage caused to the coast is just a trailer, pointing out that heavy rains coupled with cyclones can create havoc and devastation of the Colva beach if temporary measures are not initiated at the beach on utmost priority.
“I have been living here close to the beach since my childhood days. The last time we had witnessed the creek waters changing the course was around four decades ago, around 45 years to be precise,” Domingo said.
He recalled that the authorities then had built a wall with a foundation of rubbles just where the creek water enters the sea. “The rubble wall has disappeared over the years and the creek waters this time changed its course towards the children’s park side instead of entering the sea,” he said.
He added: “The worst is not over yet. The cyclone is yet to hit the coast this season. And, if the cyclone is accompanied by heavy rains, things may worsen further on the beach.”
Domingo has suggested both short-term and long-term measures to arrest the soil erosion. “To contain further sea erosion, the authorities should place concrete blocks to ensure the creek waters enter into the sea instead of flowing towards the northern side. The authorities can take up the long term work of building a rubble wall during the summer,” he added.