■ TREES ALONG DANDEAVADDO-CHINCHINIM HIGHWAY POSE DANGER, BUT PWD NH, FIRE SERVICES PUSH BLAME ON EACH OTHER ■ DDMA YET TO INTERVENE 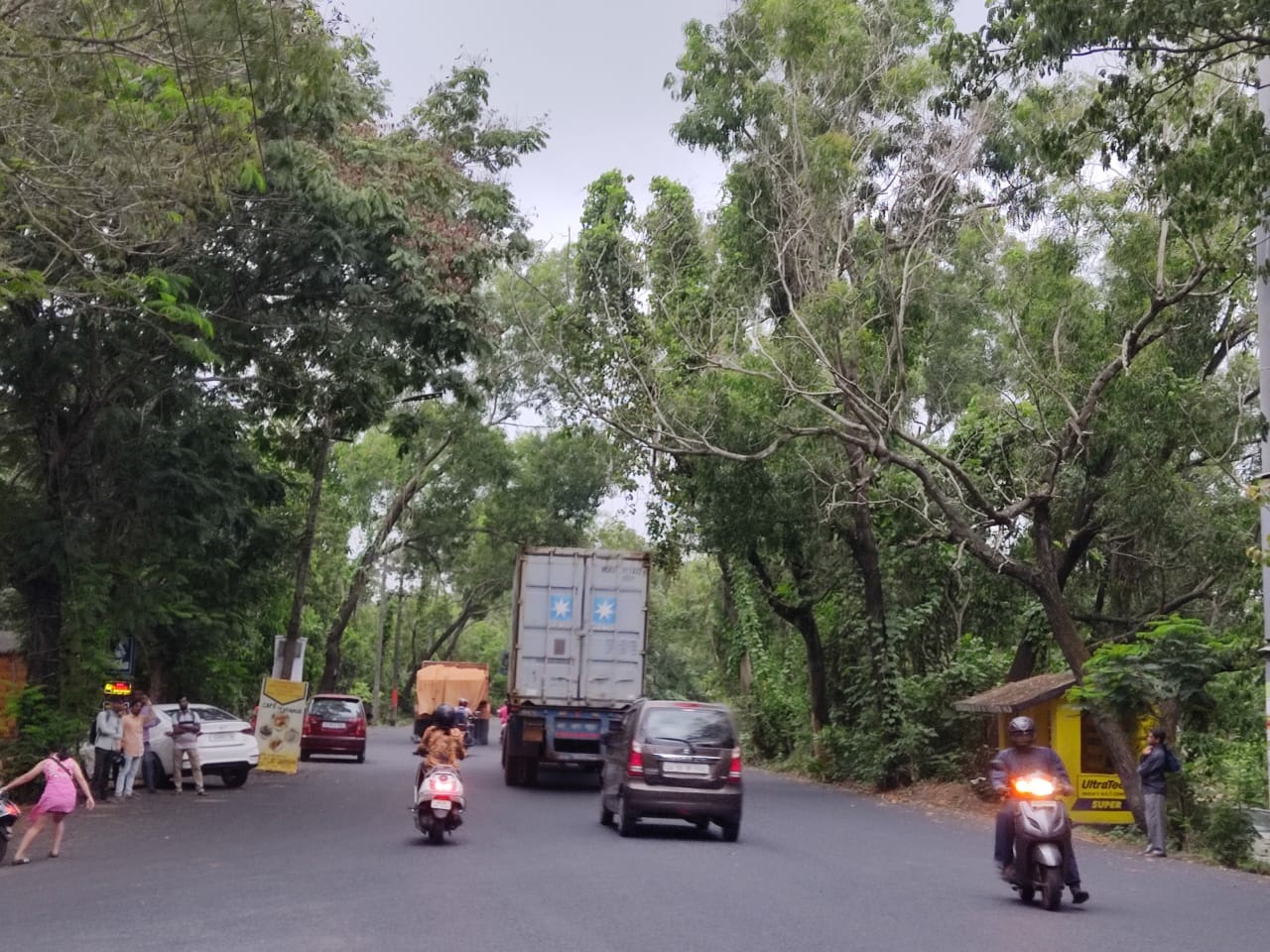 After a wet spell, firemen and rescue teams have been literally on their toes to clear uprooted trees, blocking roads and damaging property.

A drive down the National Highway 66 from Dramapur-Sirlim to Cuncolim would reveal that dozens of huge trees are hanging precariously on the road. The 12-hour-long national highway blockade at Dandeavaddo-Chinchinim, caused by an uprooted tree in the last monsoon, seemed to have still not come as an eye-opener for the authorities to trim the branches or cut down the aged trees, posing danger to vehicular traffic.

On the contrary, government departments, including the PWD-NH and the fire services are engaged in passing the buck, with each department pushing the blame on the other, as a result of which the dangerous trees still stand tall along the highway.

What’s interesting to note is that the District Disaster Management Authority has not intervened to date in getting the agencies to act before the highway is struck by a disaster.

Consider this. If the PWD, National Highway had floated a tender last monsoon to engage a private agency to prune dangerous trees on the highway, PWD-NH officials now say that the responsibility of trimming the big trees is given to the fire department and the PWD has to only coordinate with the agencies. Defending their position, PWD-NH officials refer to the April 28 last meeting of the State Disaster Management Authority (SDMA) chaired by Chief Minister Pramod Sawant wherein it was decided that the police stations will be equipped with equipment to prune smaller trees in their respective jurisdiction.

As far as the large trees are concerned, PWD officials say that it was decided at the SDMA meeting that the fire department will provide the equipment and the PWD will provide the manpower.

Fire officials, however, have begged to differ. A fire officer told The Goan that the equipment lying at the disposal of the fire services cannot be used to prune the trees hanging precariously on the highway.

“Our equipment is meant to clear the trees uprooted by strong winds. We have no labourers to climb the trees,” a senior fire official said.

The official added: “Since the trees are standing on the property of the PWD, it is in the fitness of things that the department engages a specialized agency to either prune or cut down the dangerous trees.”

Incidentally, the police stations are reported to have received equipment from the authorities, but police officials pointed out that the equipment is basically to be used to clear the branches of trees blocking roads during the rains. An official attached to the Cuncolim police station, which has jurisdiction over the Cuncolim-Dandeavaddo stretch of the highway, said the police did not start the exercise to prune the trees simply because the equipment is to be used to clear branches and not trees.

'No response to p'yat plea seeking to prune trees along Dandeavaddo'

Former deputy sarpanch of the Chinchinim panchayat Valentino Barretto has lamented that none of the authorities, including the district disaster management agency, has responded to the letter written by the panchayat to act and trim the tree branches on the Dandeavaddo-Chinchinim stretch of the National Highway 66.

“The panchayat’s efforts to get the authorities to trim the branches or cut down the trees could not succeed for want of action by the concerned department,” Valentino told The Goan.

The ex-deputy sarpanch pointed out that as many as 23 big trees are standing along the highway from the Dandeavaddo junction to St Sebastian Chapel.

“I had even called on the district authorities with a plea to do the needful, but in vain. Last year, the national highway was blocked for 12 hours after a huge tree had come crashing down at Dandeavaddo,” he lamented.

The Sernabatim incident should hopefully be a wake-up call for the district disaster management agency and the authorities to put their act together and brace up to handle disasters including tree falls.

Consider this. A huge banyan tree came crashing down on a building which is under construction, late Saturday night. If the house owner, Seby Vaz is to be believed, he had been doing the rounds of the authorities over the last two months with a plea to trim the branches of the huge tree, but in vain.

He made a fervent plea to the authorities to follow the good adage “prevention is better than cure”.

Fire Officer Gill D’Sa informed that the specialized agency was roped in by the district disaster authorities since the tree was huge and the equipment with the fire services was not adequate to clear the tree resting on the house. ﻿