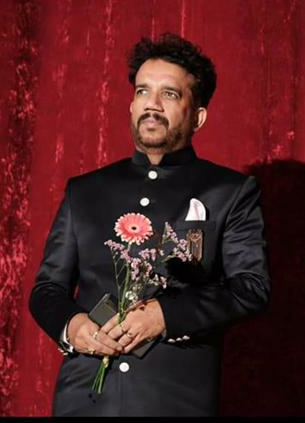 Sanjay Shetye, founder and chairman of Vinsan World, during a film event in Berlin.

The movie ‘Sthalpuran - Chronicle of Space’ was made under the banner of Vinsan Academy of Film & Media and was produced by Sanjay Shetye.

The film had earlier won two awards at the International Film Festival of Kerala 2021 and was nominated for the Crystal Bear and screened at Berlinale 2020.

The film has also been nominated in the Best Film, Best Director & Best Child Actor categories at the New York Indian Film Festival 2021.

‘Sthalpuran’ also had the distinction of being screened as the closing film at the Indian Film Festival of Los Angeles (IFFLA) on May 27.

It is a movie depicting how childhood can be full of pain and pleasure, portraying how an eight-year-old boy seeks refuge from loneliness in his imagination and diary entries, after his father's disappearance.

Sanjay Shetye is the founder and chairman of Vinsan World, a three-decade-old organisation which has businesses ranging from restaurants, travel and ticketing, advertising and digital marketing, event management and film production.

Vinsan World produced and directed a Konkani Film ‘Digant’, which grabbed attention at the 43rd edition of International Film Festival of India and was screened in the ‘Indian Panorama’ section of the IFFI 2012. It was the only entry from Goa.

The Goa Marathi Film Festival which was first launched in 2008 as a platform to celebrate the richness of Marathi cinema is also a brainchild of Vinsan World.

It was initiated with an idea to showcase Marathi cinema on a national level and enhance interaction among members representing the Marathi film fraternity, while creating a destination event for Goa.