MARGAO
Will the Margao Municipal Council, struggling to arrange funds for staff salaries, explain Madgavkars the fate of the GIS (Geographic Information System) survey which had projected revenue from business establishments running into crores of rupees?

When the MMC ATO Abay Rane was requested to provide a copy of the file containing the survey report, he only directed a worker to trace the file. This has only thrown up a pertinent question, whether the civic body has failed to tap the revenue project in the survey and has ignored the observations in mopping up the revenue.

Former MMC Chairperson Babita Agnel Prabhudesai, who had engaged a private agency to conduct the survey, said the file is very much in the record books of the civic body. “The MMC had paid lakhs of rupees to conduct the survey, which gives an insight into the number of establishments doing business in the heart of the town without licenses. The survey also gives an insight into the failure of the establishments in the markets to pay the trade license’, she said.

Babita added: “It’s now two years since the survey was conducted and completed by the agency. By this time, the civic body ought to have implemented the report and reaped dividends in the form of revenue”.

Former MMC Chairperson Savio Coutinho said the MMC had spent lakhs on a GIS survey two years ago which revealed that the civic body loses Rs 3.5 crore annually from ward no 14 alone. “We demand action as the MMC failed to act on the findings. With great fanfare, the previous Council had even spent lakhs of rupees on a GIS survey through a private agency. And even after this survey (which was carried out as a pilot project for only ward no 14) revealed that the MMC was losing over Rs 3.50  crore annually from ward no 14, the Council has failed to act on the findings of the survey”, Coutinho said.

He added: “It is only because the legally assessed taxpayers starved the Council for funds, we find the officials of the Council on the field knocking the doors to collect funds. We demand that the Council continue the process in the entire city”.

﻿Will be forced to join protest if rehabilitation not done: MLA 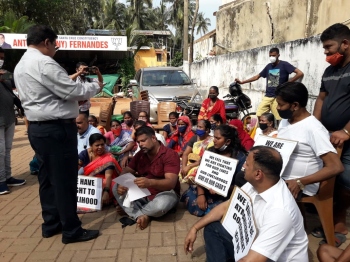