It may already be a well known destination the world over but if what a bunch of young enthusiasts are planning to do goes through, Goa's stock could rise quantitatively and qualitatively as well on the Internet.

Some 25 young volunteers from across Goa brainstormed over Saturday-Sunday on best strategies and techniques to add Goa-related content and pages on Wikipedia.

Led by software engineer Tanmay Pereira Naik of the 'Wikipedians of Goa User Group' these volunteers partook in two online sessions, where they got a low-down on how to go about contributing photographs and content to Wikipedia.

Wikipedians of Goa are optimistic that in a few months a page on every Goan village will find a place on the free online encyclopaedia.

When it comes to editing on Wikipedia, volunteers were advised to choose "reliable sources" when adding content as all of it has to be verifiable.

“You cannot add things that you know to be true, if there is no reliable source to back it up,” Pereira Naik advised the participants at one of the sessions.

"Wikipedia is only as good as the sources used on a given page," he said.

Meanwhile, in answer to a question raised by one of the participant-volunteers, he advised against using content verbatim from a source without paraphrasing.

However, once the content is up on Wikipedia, it can be copied elsewhere, as Wikipedia uses a creative commons sharealike license.

As far as sharing photographs, Julius Alphonso demonstrated how to upload pictures clicked from smartphones to Wikimedia via the Wikimedia Commons app.

UK-based Goan photographer Louis Godinho volunteered to upload many of his pictures of Goa from the 1970s and 1980s on Wikimedia Commons.

Godinho was a top media photographer in Goa those years before he migrated to the UK. He hopes the photographs from his archives will be used to spruce up Goa-related Wikipedia pages.

Over the past couple of weeks, the Wikipedians of Goa User Group has gone into overdrive creating or editing pages on Goa.

Frederick Noronha created a page on animal rights and welfare in Goa.

Some others have created pages on their villages Joe Fernandes fleshing out the Wikipedia page on “Raia” and Sharbelle Fernandez the one on “Nachinola.”

Noronha meanwhile has sought that more people come forward and contribute to pages on Goan villages, so that in a couple of months, every Goan village finds a place on the online Encyclopaedia. 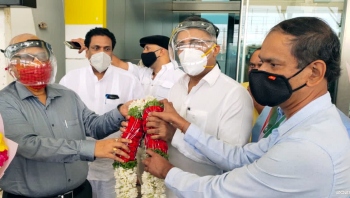 Nobody should play politics on garbage, Lobo slams Shadow Council in Margao

Validity of MV papers extended up to December 31