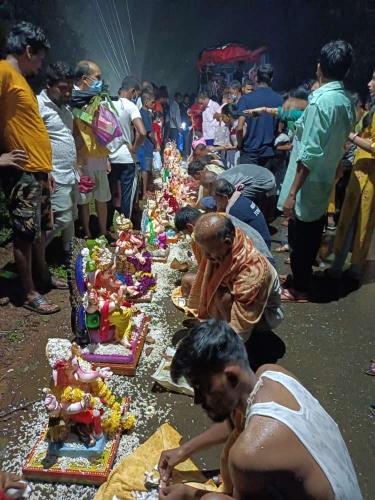 In Sattari taluka, immersion of Lord Ganesh was conducted with great enthusiasm and fervour in various villages. on the fifth day. The immersion ceremony continued till late night in most parts of the taluka.  Ganpati Bappa was bid farewell by villagers who performed various traditional bhajans, Kirtans, aarti and fugadya.

In Sattari, about 70 per cent of the villages worshipped Ganpati for five days this year. A different kind of atmosphere was created by delivering this kind of message early next year.  On the fifth day, Gauri Puja was performed throughout the day and immersion was done in the evening.  Aarti and bhajans were performed by placing idols of Lord Ganesha in the halls of temples in many villages.  Since a third wave of Corona is currently expected, villagers were unanimous in their prayers and slogans to Ganpati Bapa to protect them against pandemic.