WITH OCCUPANCY CERTIFICATE & FIRE NOC YET TO COME...

Just four days to go for Health Minister Vishwajit Rane’s September 19 deadline to open the South Goa district hospital as a Covid hospital, but the same old question has come to haunt the administration -- where’s the occupancy certificate for the imposing five-storied district hospital building?

This has thrown up a question or two, whether the government can commission the district hospital without the mandatory Occupancy Certificate from the Margao Municipal Council, more so when the Occupancy certificate is required to obtain the mandatory permissions and sanctions from statutory authorities.

Inquiries by The Goan has revealed that since the Occupancy certificate will come from the Margao Municipality only upon the payment of the construction license fees amounting to Rs 70 lakh, besides other fees, including the license renewal fees.

In this respect, sources pointed out that the Goa State Infrastructure Development Corporation (GSIDC) had moved a note to the Chief Minister Pramod Sawant to take a call whether the government would go for a waiver in the payment of the construction license fees to the MMC or promise deferred payments in times of pandemic.

Sources said the GSIDC has now been left with no option than to move to the Director of Municipal Administrator for assistance by asking the MMC to bail out the administration by accepting the deferred payment proposal, if not an outright waiver. “The first task in hand is to get the DMA request the MMC to issue the occupancy certificate since the district hospital project is a public utility building, with a promise to settle the payments at a later stage”, a senior official informed.

It was pointed out the Occupancy Certificate for the five storied building is not only needed to obtain the final fire NOC from the fire services, but to commission the Sewage Treatment Plant (STP) as well as to set up a blood bank in the hospital.

The GSIDC had planned to commission the STP Plant in the district hospital by September 20 before obtaining the mandatory consent to operate from the Goa State Pollution Control Board, throwing up a question whether the GSPCB will issue the consent to operate the STP without the mandatory occupancy certificate for the building. “STP plan is a dire necessity for a hospital, more so a Covid hospital. Let us wait and see whether the GSPCB will dispense with the Occupancy certificate for the hospital building in the event the NOC does not come on time from the Margao Civic body’, the official added.

Meanwhile, sources in the know said that GMC doctors, Dr Sunanda Amonkar and Dr Rajesh Patil along with GSIDC General Manager Jude Carvalho had visited the South district hospital ahead of the commissioning of the hospital for Covid. These officials were apparently waiting for the officials of the Directorate of Health Services to join the discussions and to take certain decisions.

*Can the government commission the district hospital without the mandatory Occupancy Certificate from MMC, more so when it is required to obtain the mandatory permissions and sanctions from statutory authorities?

* Will the Fire Services -- which had inspected the district hospital building last week -- issue the final fire NOC sans the Occupancy certificate? 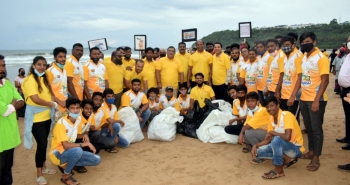