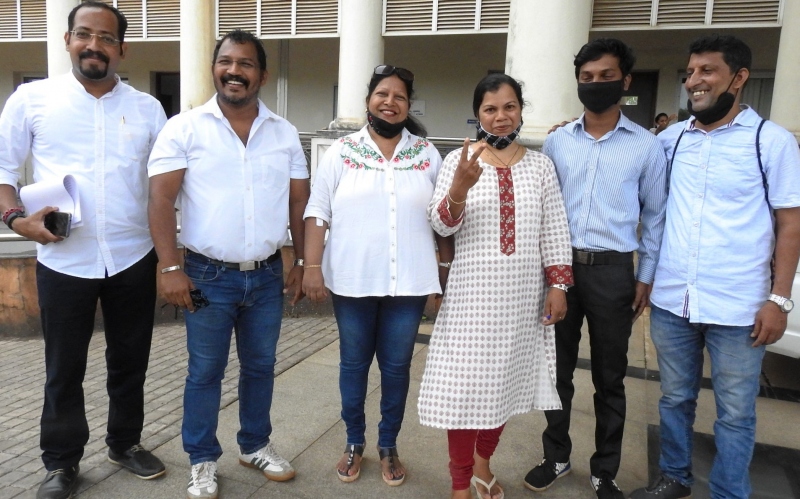 Fatorda block president Piedade Norohna and working president Yogesh Nagvenkar outside the office of the Returning Officer on Thursday.

A day after Leader of Opposition Digambar Kamat and Goa Forward Chief Vijai Sardesdai joined hands to form the Margao Civic Alliance to fight the ensuing Margao Municipal polls, Fatorda Congress leaders fielded as many as seven candidates as independents in the fray.

Fatorda Block Congress President, Piedade Norohna along with working president Yogesh Navgenkar accompanied some of the candidates to the office of the Returning Officer on Thursday for filing of nominations.

The Fatorda block Congress president Piedade later told the media that all the seven candidates will contest the ensuing elections as independents since the party leaders had told them that the ensuing polls are not fought on party lines.

“The seven candidates are not contesting the elections on the Congress banner, but as independents. Our leaders had told us that Municipal polls are not fought on party lines. That is the reason we had all campaigned as Independents and hence has decided to contest the polls as independents”, she added.

Yogesh Nagvenkar and Rochelle Fernandes had filed their nomination papers on Wednesday. Jessy Sandra Vaz filed her papers from ward no 4 which is reserved for the OBC and where the Goa Forward has fielded outgoing Margao Municipal Chairperson Pooja Naik as its candidate.

Congress in-charge of Fatorda block, Dr Ashish Kamat has said the Congress has fielded around seven candidates for the ensuing Civic polls.