Taking the platform of Dussehra festivities, Fatorda MLA tells supporters he has nothing against waste management minister and is waiting to host him at his residence 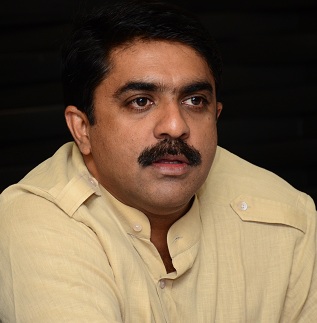 After bitter acrimony and war of words over the Sonsodo imbroglio, Goa  Forward chief and Fatorda MLA Vijai Sardesai has held out an olive  branch to Waste Management Minister Michael Lobo, inviting him to discuss and resolve the waste issue over a drink.

Taking  the platform of Dussehra festivities to make peace with the Waste  Management Minister, Sardesai told his supporters and party workers that  he has nothing against Michael and is waiting to host him at his  residence and offer him with a nice drink. “Michael is no stranger to my  residence. With Navratri and Dussehra over, I invite Michael to my  residence and will offer him a nice drink if that helps to resolve the Sonsodo issue,” he said, while inviting the Waste Management Minister to  Fatorda to work out a solution to the Sonsodo mess.

“From Saligao,  you cannot make statements on Sonsodo. People of Saligao are asking  questions on the waste issue in that area. I have nothing against  Michael. He used to come to my residence in the past. After Dussehra, we  can sit together and work out a solution to Sonsodo. The matter is in  the court and we cannot speak against the court. I am ready for  discussion. There may be some people who may be behind the Minister to  talk in a particular language,” Sardesai said, while offering an  invitation to the Waste Management Minister on Sonsodo.

Sardesai’s  offer to the Waste Management Minister assumes significance as it comes  against the backdrop of the bitter acrimony between the friends over the  Sonsodo issue. In fact, Michael had snubbed the Fatorda MLA during his  inspection of the Sonsodo site, driving past the MLA and his supporters  without giving them an audience on the issue, only to come under sharp  attack from the local MLA.

A week on, but no sign of HPCC meet nor has Pollution

MARGAO:  It’s exactly a week since the Margao Municipal Council had knocked the  doors of the government to convene the High Powered Coordination  Committee (HPCC) to resolve the Sonsodo impasse.

And, it’s a week now  when the District Court-directed joint inspection of the Sonsodo was  carried out by the MMC, Fomento in the presence of Goa State Pollution  Control Board (GSPCB) to ascertain the nature of waste lying inside the  treatment plant.

Sadly, neither there’s any news from the government  on the convening of the High Powered Coordination Committee (HPCC)  headed by Chief Minister Pramod Sawant, nor has GSPCB officials  collected samples of the waste from the Sonsodo treatment plant, leave  alone submitting any report on the waste categorisation.

On Tuesday  last, Margao Municipal Council Chief Officer Sidhivinayak Naik had written a  letter to the government to convene the HPCC meeting to discuss the  issue threadbare and evolve a solution. The MMC CO’s letter  came after the civic body had repeatedly submitted before the South Goa  District Court to grant time to resolve the issue on the plea that the  government is keen to call the HPCC meeting at the earliest.

Interestingly,  both Chief Minister Pramod Sawant and Waste Management Minister Michael  Lobo have been in Saxttidom, with Lobo even going to the extent of  saying that bio-remediation of waste would soon start at Sonsodo, but  maintained stoic silence on convening the HPCC meeting.

That’s not  all. Chief Minister Pramod Sawant had also addressed a host of issues  plaguing Salcete, but was silent on MMC’s plea to hold a meeting of the  HPCC headed by him.

The Goan understands that the question of the  nature of the tonnes of waste lying inside remains unresolved with the  GSPCB still to collect samples from the treatment plant for testing at  its lab to ascertain whether the waste is excluded or compostable. This  crucial question needs to be addressed on urgent basis as it will  determine which amongst the two parties, the MMC or Fomento is liable to  treat the waste.

Inquiries by The Goan with the waste treatment  plant managers revealed that the GSPCB has returned back to Sonsodo to  collect samples of the waste from the plant till date. This assumes  significance since the GSPCB officials, after the joint inspection, had  informed that GSPCB personnel will come to collect the waste samples  before the same is tested in the lab.