Juan Aguilera put Mumbai City ahead in the 25th minute and the hosts looked like they would stay alive in the competition until Antonio German spoilt the party with a late equaliser in the 88th minute. The draw almost killed both team’s chances of qualifying for the play-offs

Mumbai City FC and Kerala Blasters’ chances to qualify for the semi-finals in the Hero Indian Super League are still hanging by a thread after a dramatic 1-1 draw in Mumbai on Thursday.

Juan Aguilera put Mumbai City ahead in the 25th minute and the hosts looked like they would stay alive in the competition until Antonio German spoilt the party with a late equalizer in the 88th minute.

The draw almost killed both team’s chances of qualifying for the play-offs. Mathematically both teams still have a faint chance of qualifying but far too many results will have to go their way. The teams still have two matches left to be played and apart from depending on results of other matches in the League stage, they must win both, a big task for someone who have won only three matches out of 12 played so far.

Mumbai City started the match on the front foot, creating many chances in an attempt to stay in the hunt. Kerala Blasters, on the otherhand, took time to get into the groove but their sturdy defence ensured that there were no early hiccups.

Josu Prieto was the one who was creating all the chances for Kerala Blasters and went close twice in the early stages of the match. Josu’s first attempt was in the eighth minute when his shot from outside the box looked like it was headed for goal but Mumbai defender Pavel Cmovs put his body on the line.

A minute later, Mumbai survived again, with Josu at the centre of it all, curling a ball that beat the goalkeeper but missed the target by a whisker.

Mumbai City FC opened their account in the 25th minute from a corner-kick. Kerala goalkeeper Sandip Nandy, replacing regular Stephen Bywater for the first time, parried away a corner-kick by Sony Norde but the weak clearance landed well for Aguilera who struck it into the back of the net from inside the box.

It looked like Kerala Blasters had got their equalizer in the 34th minute. Chris Dagnall made a fine run inside the danger zone all by himself, cut past the goalkeeper as well but the angle was too acute for him to beat Cmovs, who had by that time got into position to defend.

Just when it seemed like Mumbai City would walk away with three points, Kerala Blasters struck the equalizer in the 89th minute. Deepak Mondal sent in a cross from the right which was headed away by Subash Singh but it went straight for German, whose low shot sailed into the net.

Mumbai City made a late dash for the winner but Cristian Bustos’s header from point-blank range was stunningly saved by Nandy. It was not to be Mumbai’s night as a minute earlier Frederic Piquionne’s shot was blocked by a Kerala defender.

﻿Badminton summer camp at Campal in May 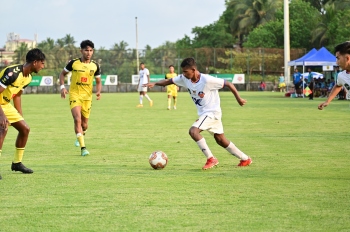