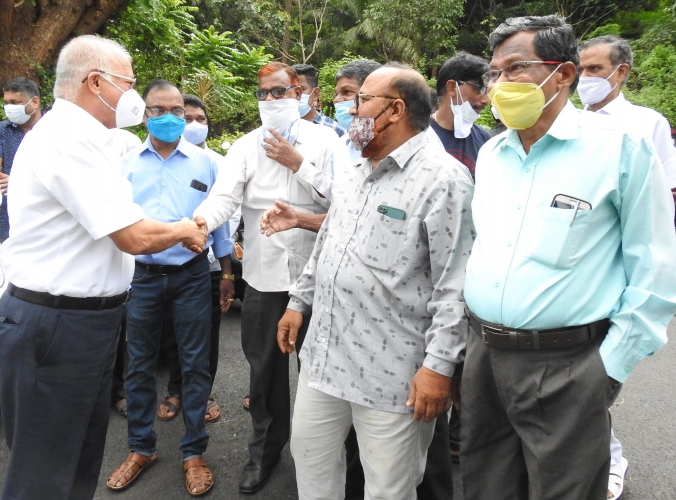 Luizinho interacting with his supporters hours before quitting the Congress and from the membership of the Assembly too.

MARGAO
Luizinho Faleiro has finally severed ties with the Congress after his decades-old association with the party, but political observers do not want to write off a seasoned campaigner such as a veteran like Faleiro in his Navelim fiefdom.

In fact, even as the Congress appears moving quickly to get its act together, sources do not rule out the possibility of the Luizinho Faleiro-Mamata Didi juggernaut emerging as a formidable force in Congress bastion Navelim in 2022.

On paper, Navelim may remain a Congress stronghold, with the party maintaining a stranglehold over the seat for over four decades, barring 2007 when Faleiro lost the only election in his 40-year old political career. The Congress again lost the seat in 2012 when Independent candidate Avertano Furtado defeated former PWD Minister Churchill Alemao.

With Faleiro severing his ties with the Congress, observers feel that Faleiro will still remain a force in Navelim, irrespective of his decision to switch sides. Observers say that Faleiro’s personal vote bank and Mamata Didi’s charisma, more so with the significant Muslim vote bank, may keep the TMC in good stead in the coming polls.

Consider this. In the 2017 Assembly election, Faleiro brushed aside a strong challenge from sitting minister Avertano Furtado and ZP member Cipru Cardozo, both contesting the polls as Independents. Faleiro, however, had a relatively smooth sailing in the polls, thanks to the significant Muslim vote rallying behind him.

Observers say the Muslim voters may continue to rally behind Faleiro on two counts, one, on account of his personal connect with the voters, and secondly, Mamata Didi’s charisma and appeal to the minorities, after having stopped the Modi-Shah juggernaut in her home state Bengal.

The only question that remains unanswered is whether Faleiro will throw his hat in the election ring or get his nominee in the fray. Sources say local satraps may not be averse in contesting the ensuing polls under the TMC banner, if Faleiro decides to move to the state or national level.

That explains why the probable candidates may take their time to the offers coming from the Congress party, as they wait for the political developments to further unfold at the state and constituency level.

Will the BJP test the political waters in Navelim in 2022 election? This was the question doing the rounds in party circles and outside over the last few months. This question may be given a serious thought by the saffron brigade post resignation by Luziinho Faleiro and TMC’s plan to enter Navelim.

With at least three to four parties, including the TMC, Congress and Aam Aadmi Party, besides a host of independents expected to vie for a slice of the secular vote, observers say the BJP may be tempted to throw its hat in the electoral ring in 2022 to capitalize on a vertical split in the Congress vote. The BJP camp says the party has around 7000-odd voter base in Navelim.

Plan B of Congress

The Congress party unveiled its plan B for Navelim by reportedly approaching former Minister Avertano Furtado to join the party. The former Independent MLA, however, has sought some time in order to consult his supporters before taking a final decision. Sources say Avertano is not averse to embracing the Congress party and is expected to take a call within a day or two on his future plan.

In an effort to consolidate the Congress vote post resignation of party veteran, the Congress may come up with Plan C as well in Navelim. Sources said three-time Navelim ZP member Cipru Cardozo, who had polled close to 3,500 votes in 2017 election, has also been approached by Congress leaders to join the party. Cipru is keeping all his options open in the emerging political situation. “All that I know for the moment is that I will contest from Navelim in 2022. Congress leaders have approached me, but I do not want to take any decision in a hurry”, Cipru said.

How will Valanka go
about in Navelim?

NCP Benaulim MLA Churchill Alemao’s daughter Valanka has already started her campaign in Navelim.  She has been meeting people in Navelim without any party label, capitalising on the goodwill for her Churchill. With political developments unfolding in Navelim, questions are raised on how Valanka will go about her plan, whether the TMC would invite her to join the party or will the party field a local candidate in the ensuing polls if Luizinho Faleiro decides not to contest the 2022 poll.

Not the first that Luizinho has
snapped ties with Congress

MARGAO: As Congress veteran Luizinho Faleiro severed ties with the Congress party on Monday, this is not the first time that Faleiro has quit the Congress party and the membership of the House in his political career spanning four decades.

Elected under the Congress banner in 1980, Faleiro had quit the Congress party in the early 80s and later teamed up with former Chief Minister Dr Wilfred de Souza to form the Goa Congress.

The Goa Congress suffered the worst defeat in 1984 election, but Faleiro was the party’s lone member to win from Navelim in 1984.

He along with the other Goa Congress leaders later rejoined the party ahead of the 1989 Assembly polls and was elected unopposed under the Congress banner.

“I had quit the Congress after I had tabled the resolution to fulfill the twin aspirations of Goans, official language status for Konkani and statehood for Goa. Since the government of the day was not listening to these twin demands, I had quit the Congress to contest the coming election on the Goa Congress”, he said.

Faleiro recalled that only after the government agreed to meet the twin aspirations of Goans of making Konkani the official language that he along with the Goa Congress leaders returned back to the Congress. “Former Prime Minister late Rajiv Gandhi had told then GPCC Chief Sulochana Katkar to ask me if I was interested in a Cabinet berth or take up a position in the party. I opted to take up the party position to take the Congress forward”, he said, and recalled that he was elected to the Legislative Assembly unopposed in the 1989 Assembly polls.

The exit of Navelim MLA Luizinho Faleiro from the Congress has finally opened the parry doors for former Minister Avertano Furtado.

Confirming the development, Avertano said he has decided to join the Congress party on Tuesday evening.

The decision comes following a meeting Avertano had with Congress party leaders including GPCC Chief Girish Chodankar and Elvis Gomes at the Congress House on Monday.